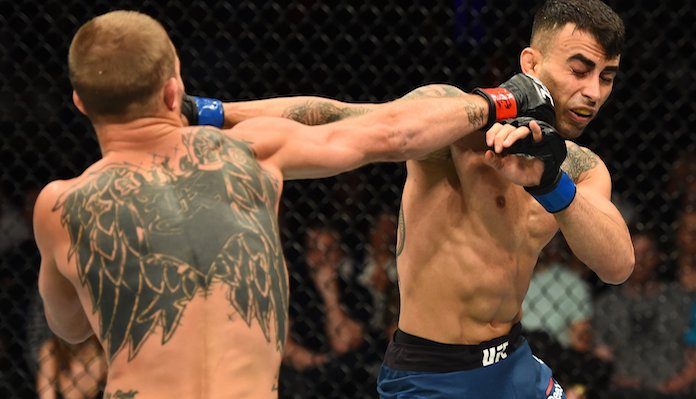 One of the most anticipated features of the UFC Liverpool main card was a featherweight scrap between “Mr. Finland” Makwan Amirkhani and Jason “The Kid” Knight. This fight lived up to all expectations, as the two featherweights gave as an absolutely thrilling scrap.

Amirkhani started the first round very strong, cracking his foe repeatedly with a strong lead left, and trash-talking all the way through. As the round wore down, however, Knight dropped his foe not once, but twice, and closed out the round threatening with his vaunted submissions from the bottom.

In the second round, the frenetic fun continued, as Knight ramped up the trash talk, taunting Mr. Finland by telling him he has “a weak chin”. Evidently unfazed by this trash talk, however, Amirkhani began to lean more heavily on his wrestling, completing two takedowns.

With this win, Amirkhani rebounds from a March, 2017 split decision to Arnold Allen. The Iranian-born Fin is now a strong 14-3 overall, and 4-1 in the Octagon.

Knight, meanwhile, is now on a tough, three-fight skid, having also recently been bested by Ricardo Lamas and Gabriel Benitez. He’s 20-5 overall.

What did you think of the scoring for Makwan Amirkhani and Jason Knight’s UFC Finland scrap?