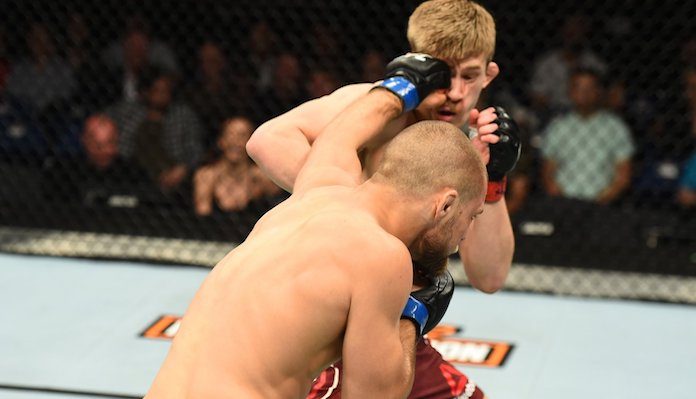 Shortly after Makwan Amirkhani and Jason Knight’s fantastic UFC Liverpool featherweight scrap, we got another wild fight in the featherweight division, as England’s Arnold Allen collided with Denmark’s Mads Burnell.

The first round began with Burnell leading the dance on the feet, landing a surprising amount of volume, including a few nice body kicks. Then, when Allen began to find his range on the feet, Denmark’s Burnell completed the first takedown of the fight. Allen then muscled his way back to the feet, was taken down again, returned to the feet again, and completed a trip of his own as the first frame drew to a close.

In the second round, Burnell looked to bob and weave, peppering in leg kicks and jabs. He then once again turned to his wrestling, completing yet another takedown. This time around, Burnell did a far better job of keeping his foe glued to the canvas, and snuck in a number of thudding punches to the body and head. Eventually, Allen worked his way back to the feet. Unfortunately for the Brit, it was only a matter of seconds before Burnell completed a rocket-fuelled double leg — his fourth successful takedown in five attempts. Burnell then closed out the round in top position.

In the third round, things went from bad to worse for Allen, as he was promptly taken down yet again. The Brit was then able to get back to his feet, but was mushed into the cage, and after a brief struggle against the chainlink, taken down yet again. Then, everything changed. After losing nearly every minute of the fight thus far, the Brit reversed a takedown, locked up a front headlock, and coaxed out a tap to derail what looked like a blowout for Mads Burnell.

With this win, Arnold Allen builds on the momentum of an early 2017 win over Makwan Amirkhani, and improves to 13-1 overall. Burnell, meanwhile, returns to the loss column after a win over Mike Santiago. He’s now 9-3 overall.