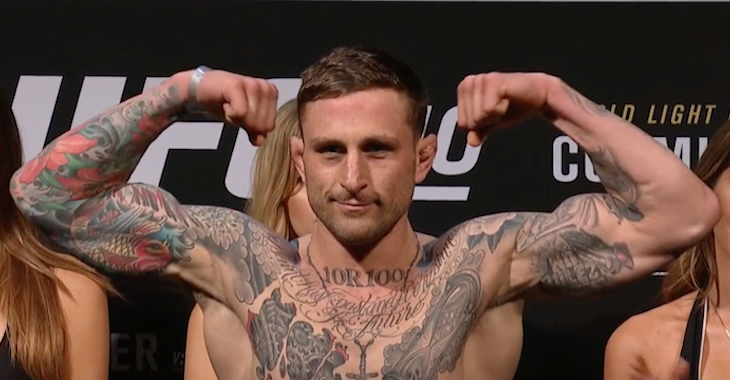 A lightweight scrap between Jordan Rinaldi and Gregor Gillespie took place on the main card of tonight’s UFC event in Charlotte.

Gillespie pressing forward early. Jordan tries to keep him at bay with his jab. Gregor continues to pressure and lands a left. He shoots in and scores with a single leg takedown. Gillespie moves to half guard and then steps over into side control. Rinaldi looks to scramble but cannot break free from the position. Gregor moves to mount and begins working some short shots. Jordan scrambles and gives up his back. Gregor rolls him over and lands some heavy shots. Gillespie moves back into full mount. Rinaldi scrambles and once again gives up his back. Gillespie stays on him and works some knees. He is looking to lock in a body triangle. He flattens Rinaldi out and starts raining down some heavy shots. The referee takes a look. Jordan is getting hammered here. The referee has seen enough and steps in and calls the bout.