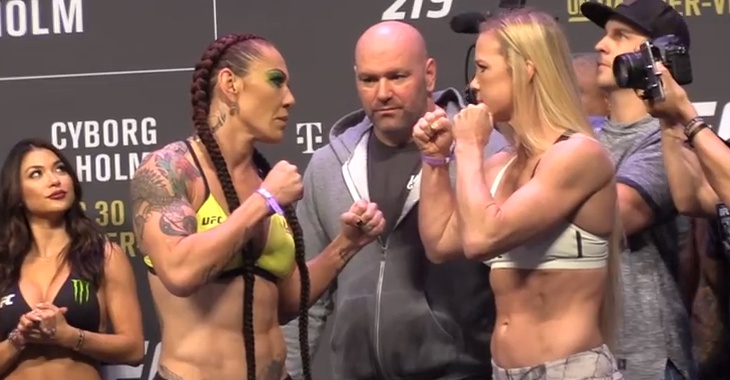 UFC 219 is tomorrow! Which means we got the weigh-ins today. Check out all the fighters making weight and their stare downs at the ceremonial weigh-ins.

Can Calvillo make it four in a row inside the Octagon? @Cyn_Calvillo takes on @CarlaEsparza1 at #UFC219 pic.twitter.com/Ap24o7zkyt

If you didn’t already know who’s on UF  219…then where’ve you been?! The card’s lineup will happen in the following order:

That wasn’t all that happened Friday though. The UFC also held their first press conference for UFC 220 which takes place on January 20 in Boston, Massachusetts. The presser featured both main and co-main event fighters such as the champions, Stipe Miocic and Daniel Cormier as well as their challengers, Francis Ngannou and Volkan Oezdemir. Both challengers have burst onto the scene in 2017 and are looking to shake things up at the tops of their divisions. The two pairings squared off for the very first time. Check it out below!

And of course, the highlights from the presser itself:

UFC 220 is yet to be finalized, but at the moment it looks like this(aside from the title fights):