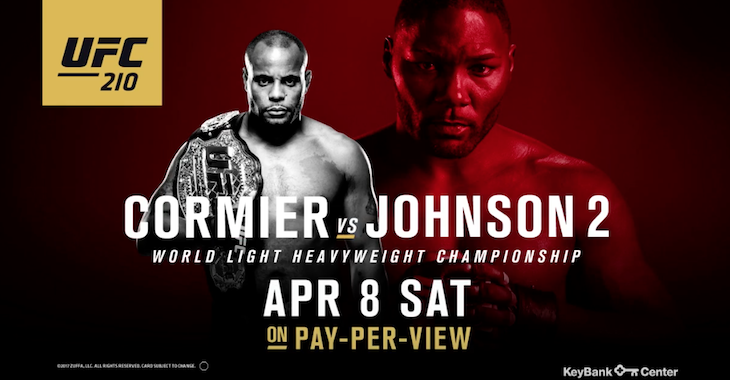 Cormier and Johnson first met at UFC 187 in 2015, where Cormier was able to weather some early adversity and eventually score a submission victory over Johnson.

Cormier will be riding a 3-fight win streak into the bout, which includes his aforementioned win over Johnson for the vacant light heavyweight championship. Most recently, Cormier defeated MMA icon Anderson ‘The Spider’ Silva at UFC 200 in July, this after Jon Jones was pulled from the bout just 48 hours before the event due to a failed drug test which was later deemed to be the result of a tainted supplement.

Similarly, Johnson will be riding a 3-fight win streak into the bout, going 3-0 since dropping the loss to Cormier at UFC 187. Most recently, Johnson picked up a brutal 13-second KO win over Glover Teixeira at UFC 202. While he was slated to fight Cormier at UFC 206 in December, the bout was postponed after Cormier withdrew from the fight with a torn adductor in his groin.

In the co-main of UFC 210, former UFC middleweight champion Chris Weidman will look to get back into the win column when he squares off with surging division contender Gegard Mousasi.

Weidman was last seen in action at UFC 205 this past November in New York where he suffered a brutal third-round knockout loss to now top contender Yoel Romero.

Meanwhile, Gegard Mousasi has won four fights in a row, his most recent victory coming over Uriah Hall via TKO this past November in Belfast, Northern Ireland.

Check out the full UFC 210 lineup and official start times below:

What do you think of the finalized UFC 210 lineup? Sound off, PENN Nation!