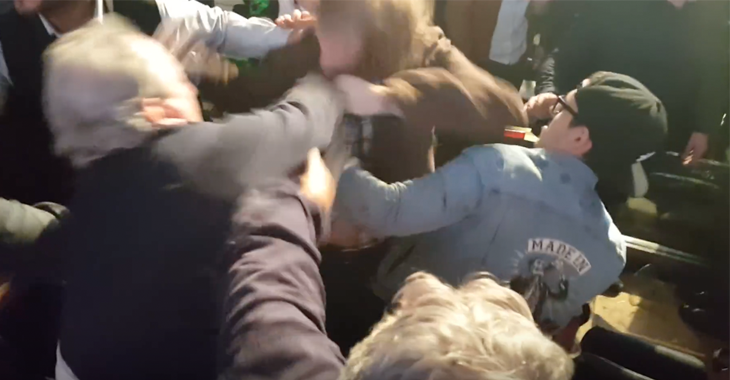 “Sitting here tonight we broke every record in UFC history tonight,” White said to the media at the post-fight presser. “Every record. The only one I’m waiting on now is the FOX number, how did FOX Sports 1 do. It would be really, really weird and make no sense if we didn’t break that one too.”

UFC superstar Conor McGregor also made history at UFC 205 as he defeated Eddie Alvarez to become the first fighter in UFC history to be a concurrent champion of two weight classes.

“The Notorious” put on a brilliant performance in the biggest fight of his life knocking Alvarez down three times in the first round. Things came to a close in the second round when McGregor landed a quick four-punch combination that sent Alvarez to the canvas once again where “The Notorious” followed up with quick ground and pound to finish the fight off.

Fans in the Madison Square Garden erupted when McGregor won and claimed his spot in history.

However, one fan may have missed the historic moment after getting in a fight in the crowd at Madison Square Garden.

A video shot (click here to watch on YouTube, sorry the video was not shareable!) from a fan shows another fan in attendance gets into an altercation with a few other members from the crowd. It’s not clear what caused the confrontation to get physical but the one man who gets elbowed and punched gets carried out from his seating area and may have just missed the main event!

The video description says, “Ding dong starts a fight with a bunch of dudes at UFC, and gets himself promptly kicked out right as Connor McGregor enters the arena.”

We here at BJPenn.com do not condone fights outside the means of regulated competition. Mixed martial arts is a sport that is regulated with a defined set of rules and regulations overseen by a commission, referee, and with medical staff on site to ensure a safe competition amongst highly trained athletes.