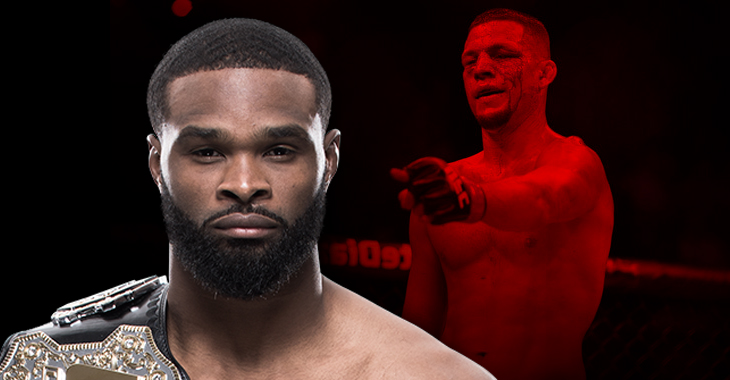 With UFC 219 being one of the more problematic cards of the year, the UFC had to do something major. The wild news of Tyron Woodley possibly fighting Nate Diaz at UFC 219 comes right on the heels of the younger Diaz brother entering into training camp. Who knows if the fight actually gets done, but it seems like it is working towards that way and as we all know, anything can happen in this fight game. The people over at Bovada have already released opening odds on the scrap.

If you’re looking for action, now is the time to put your money on Tyron Woodley because he’s a sizable favorite. It’s not that hard to tell why. Conor McGregor had to eat breakfast, second breakfast, elevenses, lunch, afternoon tea, dinner, supper and two desserts to make 168lbs for his welterweight bout with Nate Diaz and still managed to beat the career lightweight at UFC 202. Of all of Nate Diaz’s six ventures at welterweight, he’s won half of them. Tyron Woodley is a stout 170-pounder who will blow up even more after cutting to the limit and could give Diaz the same problems that Rory MacDonald did at UFC 129.

However, if you’re willing to go for the underdog bet, Nate Diaz presents problems for any fighter who dares to take him down. Not only that, while Woodley possesses demonstrable knockout power, Diaz is a rangy striker with excellent boxing known for an infinite gas tank. Even if you’re not the betting type, this style clash should be enough to get excited about the possible match-up. If you change your mind though, odds are good if the two fight in 2017 or in 2018.