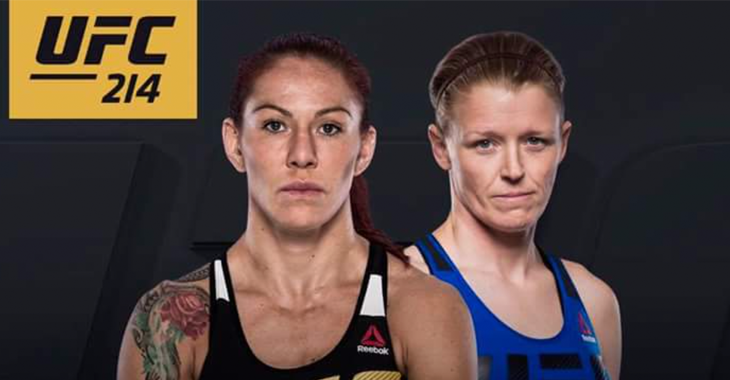 This Saturday, the UFC will touch down in sun-soaked Anaheim, California with UFC 214. The card stands out as the biggest of the year thus far, thanks in large part to the three title fights that top the bill. The biggest of these title fights, and the card’s main event, will occur at light heavyweight, where reigning champion Daniel Cormier and former champion Jon Jones will battle for light heavyweight gold. The co-main event, meanwhile, will be a welterweight title fight between champ Tyron Woodley and challenger Demian Maia. The first title fight of the bunch, finally, will go down at featherweight, where women’s pound-for-pound stalwart Cris “Cyborg” Justino will battle former Invicta bantamweight champion Tonya Evinger for the vacant throne.

Ahead of this massive fight, which will mark her long-awaited UFC debut, Evinger joined Ariel Helwani for a quick chat. During this discussion, Evinger made the somewhat surprising admission that she feels the UFC dislikes both her and Cyborg – she’s just not sure who the promotion dislikes more.

“I don’t know who [the UFC] wants to win,” she said. “I don’t know who they hate more, me or her. I think it’s a weird situation to think about, but I can’t imagine losing so… I’m definitely here to win.”

Evinger also commented on whether she feels she was brought in to lose against the incredibly dominant Cyborg.

“I think I’m just somebody who’s crazy enough to take fights that other people aren’t” she said. “Obviously I win those fights usually. I plan on winning this fight. I think it’s just one of them things. It’s the role I play.”

Evinger won the Invicta bantamweight crown with a TKO win over Irene Aldana in 2015. Since then, she has defeated Pannie Kianzad, Colleen Schneider and Yana Kunitskaya. She is 19-5 overall, with one no contest.

Do you think Tonya Evinger can pull of an upset for the ages against Cyborg at UFC 214?