Justin Gaethje reveals current weight, plans to be over 170lbs at UFC 249

Justin Gaethje came to the rescue of fight fans around the world by accepting a short-notice contest with Tony Ferguson at UFC 249 on April 18.

Ferguson was originally slated to challenge undefeated lightweight kingpin Khabib Nurmagomedov at the event. However, due to the Covid-19 pandemic, ‘The Eagle’ was left grounded in Russia.

The promotion quickly moved to secure a new event headliner for UFC 249 in the form of an interim lightweight title fight between Justin Gaethje and Tony Ferguson.

‘The Highlight’ will enter his bout with ‘El Cucuy’ on a three-fight winning streak, with all three of those wins coming by form of knockout. During that impressive run, Gaethje has put away James Vick, Edson Barboza and Donald Cerrone respectively. 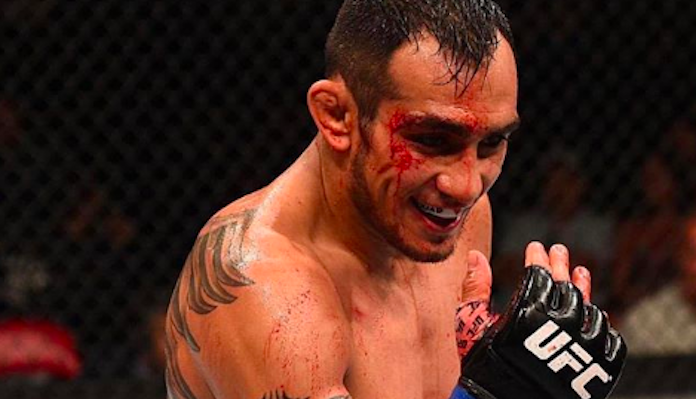 Meanwhile, Tony Ferguson will enter UFC 249 on a twelve-fight win streak, his latest being a TKO victory over the aforementioned Donald Cerrone.

One of the concerns surrounding the short-notice fight for Justin Gaethje is his current weight.

‘The Highlight’ spoke with ESPN earlier today where he provided the following update on his current weight and where he expects to be on April 18.

“Justin Gaethje tells me he has 13 pounds to cut as of today, and believes he’ll walk into the cage against Tony Ferguson weighing about 173 pounds.” – Brett Okamoto

The new location and venue for UFC 249 have yet to be released by the promotion. According to UFC President Dana White, the promotion is remaining tight-lipped about the event to prevent any outside interference.

If Justin Gaethje can defeat Tony Ferguson on short-notice at UFC 249 he will not only capture the UFC’s interim lightweight world title, but also guarantee himself the next shot at Khabib Nurmagomedov.

Do you think Justin Gaethje will be cut thirteen pounds in the next eleven days for UFC 249? Share your thoughts in the comments section PENN Nation!

This article appeared first on BJPENN.COM
Previous articleDominick Cruz ready to step in and fight Henry Cejudo at UFC 250
Next articleTony Ferguson on Justin Gaethje: “I’m gonna give him a highlight of his own”
© Newspaper WordPress Theme by TagDiv