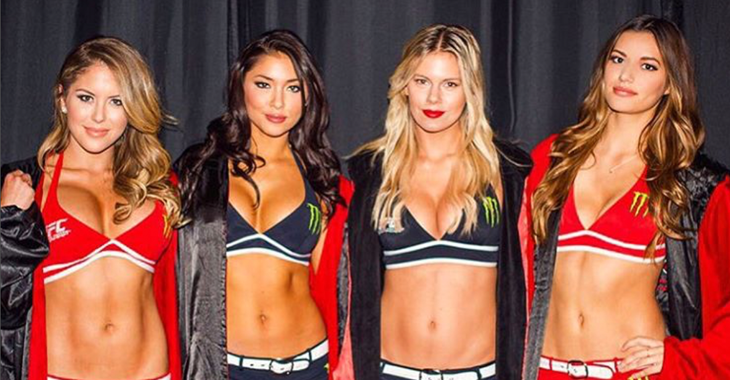 As I watch You Tube footage of Octagon Girl Arianny Celeste’s theatrically enamoured reaction to UFC heavyweight Alistair Overeem’s muscular torso during the UFC 141 weigh in, I cringe.

Seeing her congratulatory clap, as host Joe Rogan confirms that the ‘demolition man’ has reached the magic number, I can’t help but compare her to the women who risk their health to step into the Octagon for our viewing entertainment on a regular basis.

Despite Overeem’s impressive physique, I can’t imagine a Holly Holm, Ronda Rousey or Rose Namajunas taking on such a submissive and awe-struck stance towards a male fighter.

While they may admire Alistair for his myriad of achievements in the world of combat sports, they do so with the knowledge that they too are equally entitled to share any stage that he sets foot on.

And so, with women’s MMA no longer being viewed as purely sub-standard and possibly arousing entertainment by male fans (perhaps some female fights fans too!), but that of a battle filled with tremendous talent and skill, aren’t Octagon girls, who are essentially on show for their bodily assets, not only outdated, but undermining the progress and respect that female fighters have worked hard to earn?

Going by the recent decision of both Formula One and The Professional Darts Corporation to ban female models who are present for purely ceremonial and entertainment purposes, the above view would appear to resonate with most.

Managing Director of Commercial Operations at Formula 1, Sean Bratches, said; “While the practice of employing grid girls has been a staple of Formula 1 Grands Prix for decades, we feel this custom does not resonate with our brand values and clearly is at odds with modern day societal norms. We don’t believe the practice is appropriate or relevant to Formula 1 and its fans, old and new, across the world.”

Yet, there is another side to this argument which has been articulated publicly.

It centres around the view that to ban Octagon girls is an act of discrimination within itself. That depriving women of a means to earn income from a role that they have, as consenting adults, agreed to, is not only dictatorial but unfair.

Up until recently, it was my view that this opinion was being conveniently spouted by those who had a hidden motive – that of desiring to continue seeing these physically beautiful scantily clad women on their television sets.

While I still believe that in some instances this is the case, I was forced to sit up and listen when I began to see others on social media, women included, echoing the same view.

And so, with the purpose of writing this article, I decided to reach out to some of the most successful women in MMA in Ireland, to hear their views on ‘The Octagon girls.’

After all, who could be more qualified to speak on the topic?

Having completed her apprenticeship as an event press coordinator for BAMMA for two years running, Lydia Des Dolles set up MMA Connect TV in 2016 with the purpose of giving an insight into the community spirit within combat sports.

Des Dolles is not only a successful entrepreneur, but a Jiu jitsu practitioner competing out of East Coast Jiu Jitsu Academy in Dublin Ireland.

As someone who is immersed in Ireland’s MMA scene around the clock, her view was one I was very interested in hearing.

“I understand where some women are against the seemingly sexualisation of other women, and might feel justified in campaigning for those women to lose their jobs,” Dolles began. “However, I am strongly of the opinion that the bottom line is ‘my body, my choice.’ I work with these women on a daily basis, and I think it’s a real shame that anyone (male or female) try take away from those well paid jobs, jobs that may be essential to their security. I fully support my colleagues in their choice of work, and am opposed to anyone attempting to dictate where, when or how these women can work or choose to live their lives.”

In terms of hindering her career as an MMA presenter, Des Dolles hasn’t found that the presence of The Octagon girls has had an negative impact.

“I’ve never felt that I was once out of place, Ive never once stood back and said to myself this is awkward I feel uncomfortable…. yes, at the start I had to earn fighters and coaches trust to get access to film them…but by persevering with that and keeping content interesting relevant and positive we’ve come to this really great space where I think we’ve created a really positive platform for the sport – and that makes me very proud.”

Having witnessed Catherine Costigan defeat Wendy Mc Kenna in the co-main event at Cage Warriors 81 in March of 2017, I was eager to chat to the co- owner of Pankration Kickboxing Academy in Limerick about this controversial topic.

“I’ve fought all over the world,” Costigan stated. “At every show ring girls were present. Even Invicta FC, which is an all-female show, had ring girls present. All of the female athletes on the Invicta cards supported them and still do.”

“I see them as part of the team for the night,” The ‘Alpha – Female’ continued. “They are simply making a living in a very exciting work environment. These ladies are just the same as the fighters, they have a job to do on the night. I don’t think it’s affected the growth of the biggest male/female combat sport, which has become a dominant force in the world. Women are always a force in any aspect of line if they chase their dreams and ignore the negative!”

Having competed at both flyweight and strawweight level with Invicta FC, Cage Warriors, Cage Rage, The UFC and Bellator, ‘Ash the Bash’ has always been a mixed martial artist that I have looked up to.

Mirroring her style in the cage, Daly didn’t hold back when asked to share her view on Octagon girls like Celeste.

“I think Octagon girls are pointless and don’t contribute anything meaningful to the sport,” Daly opined, quick to the point. “They are completely unnecessary. I think they are outdated. I also find it infuriating that a number of ring girls/octagon girls get paid substantially more than most fighters for a ‘job’ that requires little skill and zero risk.”

Daly’s reference to the Octagon girls rate of pay when compared with fighters is a bone of contention which other fighters, including former bantamweight champion Ronda Rousey, have previously raised.

“It’s disgusting to think a young competitor putting themselves at risk for our entertainment is valued far less than a good-looking woman holding a piece of cardboard with a number on it,” Daly concluded, her passion for this injustice evident.

Despite the women’s sport trust, a UK charity with the aim of raising the visibility and impact of women’s sport, calling for an end to female models across the world of sport, it has been widely reported that boxing has no plans to follow suit.

Kalle Sauerland, the brains behind the ground-breaking 50 million dollar World Boxing Super series competition, regularly uses SBJ (not to be confused with SBG!) Model Management to help promote his events.

He recently tweeted “I can guarantee you this will NOT happen with the World Boxing Super series ring girls.”

“Firstly, darts is shown on TV a lot and the truth is the walk on girls aren’t really doing anything.” Hearn stated. “Whereas the ring card girls are serving a purpose. And secondly, the ring card girls have been a part of boxing history for many, many years. Hopefully they will continue to be there.”

While The Octagon girls future at cage side is still uncertain, it is the brave and talented women within the cage that I will continue to keep my eye on.

With the female MMA scene growing by the day worldwide, I recommend that you do the same. Blink, and you might miss something special.