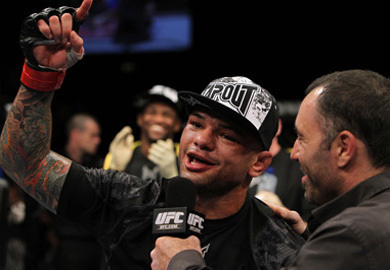 Here is what Alves had to say via MMA Weekly:

“I just went through another surgery. I had to do my PCL and my ACL on my left knee and I was excited to do that because it’s an old injury; I’ve had it since 2009. At this point, I knew the PCL was gone, but the ACL was damaged too. I already took half of the year off because of the chest surgery and I haven’t been 100-percent since 2009 because of the knee. I’ve got a few years ahead, I’m still just 29, so we’re going to do this right. That’s why we decided to get everything done, get it out of the way. So I can come back at 100-percent. I’m shooting for June of next year, hopefully by the middle of the year I’ll be ready to go. I’m thinking about four to five months of rehab, and three months to get in shape. So I’m shooting for June [or] July.”

Alves hasn’t seen action since March, where he headlined UFC on FX opposite Martin Kampmann. “The Pitbull” looked brilliant in the first two rounds of the Kampmann fight, but ended up losing via submission in what was a shocking third round comeback.

One can only hope that Alves is able to make a speedy recovery.