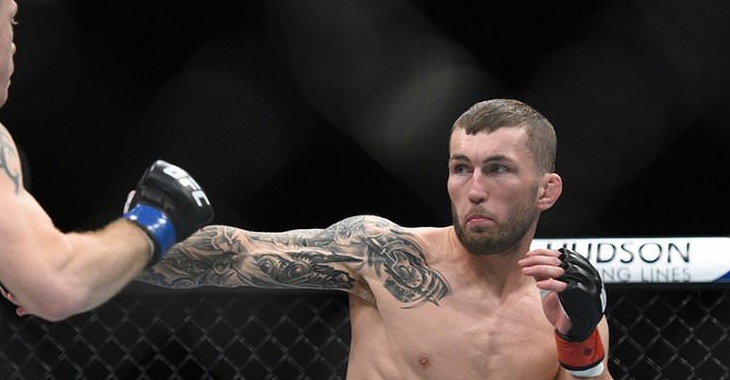 After fighting out his previous UFC contract under the advisement of his previous manager, there was some doubt as to whether or not rising lightweight contender Stevie Ray would re-sign with the promotion. Luckily, the Scottish fighter was ultimately able to hash out a new deal with the UFC. He’s now set to return to the cage opposite Kajan Johnson when the UFC touches down in London on March 17.

Ray announced his new deal with the UFC on Facebook, simultaneously apologizing to the promotion for fighting out his contract in an attempt to leverage a more lucrative deal.

“I can now announce I have re-signed a 4 fight deal with the UFC and I am fighting in 4 weeks at UFC London. I will face Kajan Johnson,” Ray said in his Facebook post.

I took a gamble with my career under some bad advice not realising I was risking not being resigned with the ufc I only ever thought i was risking the price in contract.

I want to thank Sean Shelby and the UFC for giving me another chance as it was my fault for fighting out my contract.

I also want to also thank my new manager for even making this possible Ali Abdel Aziz he was willing to help me without even being signed with him which shows he’s a legend!

Thanks to all my friends, family, coach’s, team mates, my sponsors and all my fans that have continued to show ur amazing support throughout.

Though Ray has expressed regret with his choice to fight out his contract, this gamble has panned out favorably for other fighters, such current Bellator welterweight champion Rory MacDonald, and current Rizin bantamweight star Kyoji Horiguchi. That being said, it’s great to hear things worked out the way the ever-improving Stevie Ray hoped. Catch him back in the Octagon opposite Kajan Johnson on March 17.