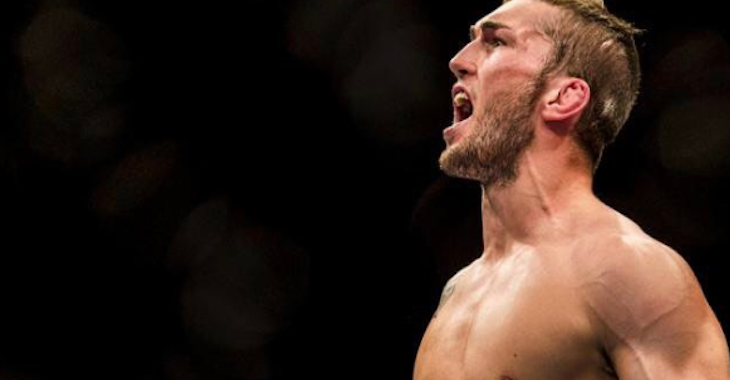 On July 16, on the main card of the UFC’s second trip to Glasgow, Scotland’s own Steven Ray will step onto the canvas with Paul Felder in an effort to take another big step toward the lightweight title. That title, of course, is currently on hold, as the champion Conor McGregor is focused on a boxing match with undefeated legend Floyd Mayweather Jr.

In advance of his fight in Glasgow, Ray made an appearance on BJ Penn Radio, and weighed in on this blockbuster Mayweather vs. McGregor fight. In his opinion, McGregor has a far better chance than people seem to think. In fact, he thinks the UFC champ has a better chance at cracking the Mayweather code than most boxers would.

“I think he stands a better chance than most people would think,” Ray explained. “I think Conor’s probably got a better chance than most boxers to be honest, because any boxer in a boxing fight is probably going to lose, because Floyd’s obviously the better boxer. If anybody is going to beat Floyd, it’s probably going to be somebody that’s not going to come in with a traditional boxing style, that probably isn’t going to move exactly how a boxer would. [McGregor’s] style as well; he’s tall, he’s got a reach advantage, he’s a southpaw, he’s much bigger than Mayweather. Mayweather’s not fought in four years or three years, he’s forty years old. There are a lot of factors that play in that could maybe make the difference. And obviously Conor with the whole mind games stuff, and getting in your head.” Ray then admitted that he actually has a hunch that McGregor will pull off the upset.

“It will probably take Mayweather a few rounds to even get into the rhythm, and Conor comes out strong early, he hits hard, and he’s not going to have the same movement. Conor’s chances are going to be early, and I’ve just got a weird feeling that McGregor’s going to win by knockout early. Obviously if he doesn’t, Mayweather just outclasses him and gets the decision.”

“Conor is a smart guy, he can lose, but obviously he can win.”

What do you think of Steven Ray’s in-depth assessment of McGregor vs. Mayweather?