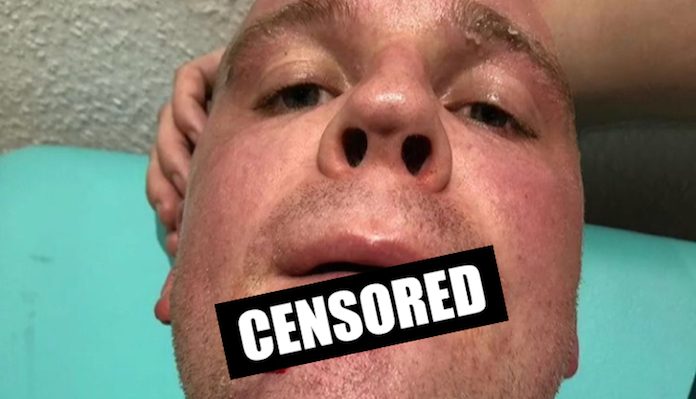 On Sunday afternoon, on the main card of UFC Hamburg, heavyweight veteran Stefan Struve returned to the cage for a fight with dangerous Polish contender Marcin Tybura.

Struve was not without his moments in this fight, landing some nice leg kicks throughout, and wobbling his foe on one occasion. Unfortunately, he also succumbed to a number of cleverly timed takedowns, which caused the judges to score the fight unanimously for Tybura.

Struve also left the cage in Hamburg with one of the more horrific cuts we’ve seen recently  — just below his lip, a place we don’t often see cuts form.

The towering heavyweight shared an image of this gruesome cut shortly after his tough loss to Marcin Tybura. See it below.

WARNING: It probably goes without saying, but stop scrolling if you’ve got a week stomach!

“Thanks for the love as always, time to clear my head for a bit and focus on other things for a while,” Struve said in his post-fight statement on Instagram. “Make the most of this life, far as we know we only get to do it once! Surround yourself with good people that truly care for you and enjoy this ride! Time for a beer for my 2 mouths 😅 #loveyall BTW you are looking at my tongue sticking through.”

With this decision loss to Tybura, Stefan Struve falls onto a three-fight skid, having also recently given up a decision to former champ Andrei Arlovski, and succumbed to third-round punches from Alexander Volkov. His last win occurred in October of 2016, when he submitted Daniel Omielanczuk by submission. This win was preceded by a 16-second knockout defeat of Antonio “Bigfoot” Silva. The towering Dutch fighter is now 28-11 overall.

What do you think the future holds for Stefan Struve after UFC Hamburg? Here’s hoping that cut heals up quickly!