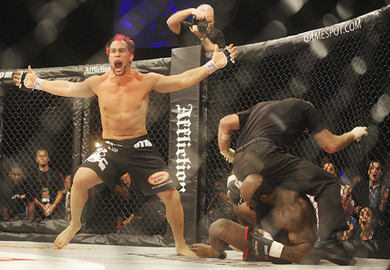 Former UFC light heavyweight, Seth Petruzelli (14-8 MMA), has decided to call it a career and hang up the gloves. Petruzelli suffered a one-punch KO loss to former Strikeforce light heavyweight champion Muhammed Lawal this past Wednesday night at Bellator 96, which more than likely helped prompt his decision.

“I want to thank my family, friends, fiancée and fans for being by my side these past 13 years plus of my MMA career. Every time I fought it was to please and excite you but most of all make you proud of me. Up until a couple years ago it pleased and excited me as well. That is where I went wrong, for the past couple years I have been fighting for the wrong reasons, I don’t have the desire or drive to fight like I used to and the past couple fights have shown it. So at this point in my life I would like to officially announce my retirement from the sport of MMA. Competing has been a part of my life since I was 6 years old, now I would like to put more of an effort into seeing my students/fighters do the same and making my gym grow and flourish. MMA has taken me around the world, let me meet the best and worst of people and made me feel like the brightest star but also like a black hole at times … and I have no regrets because I did it all my way.”

Seth Petruzelli gained notoriety on season 2 of TUF, where he made it to the tournament semi-finals before losing to fellow cast member Brad Imes.  Seth was called back for a second look against TUF 3 standout Matt Hamill. Unfortunately for Seth, he was unable to nail “The Hammer,” and after a subsequent loss to Wilson Gouveia, he was released by the UFC.

Then came the biggest night in Petruzelli’s MMA career.  After Ken Shamrock pulled out of his Elite XC headlining bout with Kimbo Slice literally last minute,  Seth stepped up on just a few hours notice to take the fight. Petruzelli would then go on to shock the world by starching “Kimbo” with a first round KO.

With the “Kimbo” knockout under his belt, Seth would once again receive a call from the UFC to return to the octagon.  Unfortunately, Seth’s return to the UFC was short lived, as he was finished by opponents Ricardo Romero and Karlos Vemola respectively. Those back-to-back losses would put an end to “The Silverback’s” UFC contract and he was once again a free agent.

In 2011, Petruzelli signed with Bellator and won his debut with the promotion with a first-round knockout of former UFC heavyweight champ Ricco Rodriguez. Seth was then matched-up agianst Jacob Noe in the Season 8 205-pound tournament quarterfinals. The “Psycho” would end up defeating Petruzelli via first-round TKO at the January event.

This past Wednesday evening, Seth suffered his 2nd straight loss at the hands of Muhammed “King Mo” Lawal in Bellator’s 205-pound tournament semi-finals.

Petruzelli’s retirement marks the second UFC veteran-turned Bellator fighter to bow out this week , Renato “Babalu” Sobral being the first.