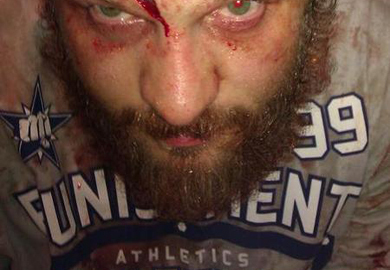 ‘Big Country’ has made the record books by absorbing the most strikes in the UFC as a heavyweight fighter. More impressive is the fact that he has done so without getting knocked out.

Fightland’s medical columnist breaks down how he likely gets away with this amazing feat:

“Nelson might have extremely strong neck muscles. Strong neck muscles can cut down on the rotational force of a hit. A lot of what determines whether someone gets knocked out has to do with where the force is transmitted into the brain. Where there’s a very strong rotational force on the skull-shots that come from the side, like hook punches, rather than straight linear shots–most of that vector force gets transmitted down into the brainstem area into what’s called the reticular activating system and that’s what’s responsible for being awake. So when you go to sleep, certain cells on the reticular activating system will get stimulated and go to sleep. When you wake up, certain cells will get stimulated and you wake up. It’s actually multiple tracks in the lower brain stem. Together they’re called the reticular activating system. And you have a layer of fluid surrounding the brain on the upper part. Again, with a very strong rotational force on the skull, say from a hook punch to the side of the jaw, what happens is there’s motion on the top of the skull because the brain is sort of floating, but as you get down to the base where it’s anchored, it’s tighter. It doesn’t have as much give. So that’s when you get that kinking in that part of the brain and that causes loss of consciousness… So as you’re hitting on the side and you rotate the head, it’s a little bit easier to transmit that force to rotate the head. Whereas, when you’re hitting direct on at the button of the chin, sometimes it’s a little harder with a very strong mandible. That’s where the shape of the jaw comes in. It’s all a matter of shape and size. It has to do with the ability to transmit the force to the base of the skull.”