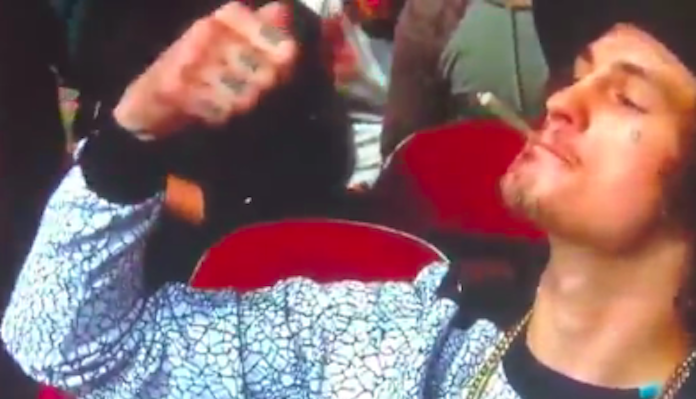 The crowd at last weekend’s UFC Glendale show was full of MMA stars, as most UFC shows are. One of the famous faces in the crowd was that of red-hot UFC bantamweight prospect Sean O’Malley.

O’Malley, who has made no secret of his love of the devil’s lettuce, did not let his screen time go to waste, channeling Nate Diaz, and pulling out a big joint as the camera panned over him.

See this sequence below:

Given that the UFC Glendale card was broadcast on national TV, many viewers wondered how the UFC might react to O’Malley’s stunt. Luckily, it sounds like the promotion was pretty cool about it.

O’Malley recounted his decision to pull out a joint on national TV, and the reaction of UFC official Heidi Dean, in an appearance on The MMA Hour.

“Where they sat us was right in the UFC section, so I figured they would [put me on camera],” O’Malley said on the show. “Eventually they come up to us and said, ‘Hey, we’re going to shoot you guys here in a little bit, we’ll let you know’. I was like, ‘this is perfect timing.’”

O’Malley said he also warned MMA Lab training partner Mackenzie Dern, who sat beside him, about his plan.

“I told her before; I warned her,” he said. “Well, I told her right before and she said, ‘Okay’. Mackenzie is cool. She’s been training at The MMA Lab for three years, so I’ve known her for a while.”

What did you think of Sean O’Malley’s on-screen stunt in Glendale? Did Nate Diaz do it better?