Sean O’Malley is one of the biggest stars in the UFC.

At UFC 280 in Abu Dhabi this weekend, he has an opportunity to take his shine to the next level when he takes on the former champion, Petr Yan.

From the moment he arrived in the Octagon, ‘Sugar’ has been synonymous with the word ‘hype.’ The level of intrigue surrounding him only grew as he amassed a series of viral knockouts. These were coupled with a succession of attention-drawing outfits and haircuts as the flamboyant star began to draw comparisons with Conor McGregor.

In many respects, O’Malley has nurtured talk of similarities between himself and the Irishman and believes that a win against ‘No Mercy’ will take his fame to the same heights as those achieved by ‘the Notorious.’

It’s a topic that Dana White covered during a recent interview with Barstool Sports.

“There was this comparison recently where Sean O’Malley said, ‘I would love to be the next Conor McGregor and be a big global superstar,’” the UFC boss explained. “Well, it’s about winning key fights.

“He’s already got that thing that people like about him. Now, it’s about winning key fights. This fight for him is like Conor’s Jose Aldo fight,” White added.

Sean O’Malley’s last outing was ruled a ‘no contest’ after he poked Pedro Munoz in the eye at UFC 276. That was the LFA veteran’s first time fighting a top-10 opponent. In Yan, the 27-year-old faces his biggest test by some distance. The Tiger Muay Thai man stands 11 places higher than Sean O’Malley in the rankings and boasts wins over the likes of Cory Sandhagen, Jose Aldo and Urijah Faber.

The Russian comes into the clash with O’Malley having dropped a split decision to champion Aljamain Sterling at UFC 273. The former champ is fired up ahead of the weekend’s showdown and says he’s determined to ‘extinguish’ the hype.’

Will Sean O’Malley pull off the upset? 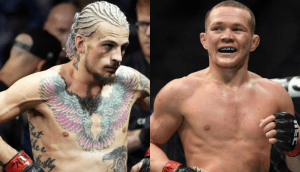 This article appeared first on BJPENN.COM
Previous articleAlex Volkanovski details the one trait Petr Yan must avoid in fight with Sean O’Malley: “I think that would be a bad idea to do this with Sean”
Next articleUFC 280 | Pro fighters make their picks for Aljamain Sterling vs. TJ Dillashaw title fight
© Newspaper WordPress Theme by TagDiv