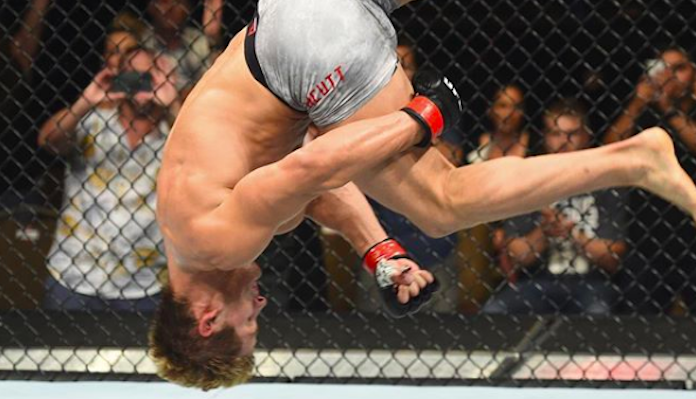 Last night, in the co-main event of UFC Boise, “Super” Sage Northcutt picked up his first victory in the UFC welterweight division, defeating Zak Ottow by KO after a period of early adversity.

While Northcutt has previously fought and won in the UFC lightweight division, this first welterweight win was important to him, as he considers welterweight his natural weight.

While Northcutt feels that welterweight is the best fit for him currently, it doesn’t sound like he considers the division his permanent home. If the absurdly jacked prospect continues to inflate, he expects he may eventually be forced up to the middleweight division — especially if he hits another growth spurt.

“Who knows?” Northcutt said backstage after his UFC Boise defeat of Zak Ottow (via MMAJunkie. “If you look at my brother, my brother’s like [6-foot-4], and he’s only 19 years old. So I hope I’m as tall as him.

Whatever the case, Northcutt’s priority, as always, is simply developing as a martial artist. He plans to accomplish this goal with the same work ethic that got him to the dance in the first place.

“I’m at his gym all the time,” Northcutt said. “I’m learning the sequences, the techniques, everything. Now, fighting at my natural weight and grow into that weight class, it will be even better.”

With his defeat of Zak Ottow, Sage Northcutt is now on a three-fight win-streak, having also recently picked up decision victories over Michel Quiñones and Thibault Gouti at lightweight. His last loss occurred in December of 2016, when he lost a welterweight bout to fellow prospect Mickey Gall.

How do you think Sage Northcutt would perform as a middleweight?