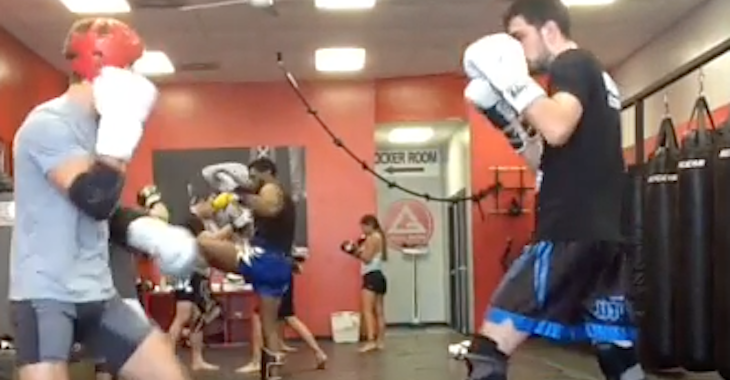 Sage Northcutt is currently coming off the first loss of his professional career at the hands of Bryan Barberena earlier this year. Northcutt is also currently in the process of preparing for his UFC 200 fight against Enrique Marin on July 9th.

Ahead of his UFC 200 fight against Marin, Northcutt went to train with Muay Thai champion Ilya Grad at Gracie Barra for some sparring. What transpired was considered “a disaster” by Grad due to the actions of Northcutt’s father.

He spoke on Luke Thomas’ show on SiriusXM to explain that the issue wasn’t with Sage himself, but rather his father. MMAFighting has the transcription:

His dad was yelling. [Sage] stopped even to tell his dad, he cannot be his coach. We were not sparring. We were having a good time, actually, me and Sage. We were working very nice, very controlled. I was talking in between, telling him what was doing well, what he should feint here, work here.

We had a great sparring session, to be honest. I had a good time with him.

I just didn’t understand why he stopped it because nothing happened. Everything was friendly, everything was controlled. I did everything intentionally not to hurt him and to make sure he’s getting better and getting his work in. It was really sad because [Northcutt’s father] made a big scene after everything. He just left our place, didn’t say thank you, didn’t say anything.”