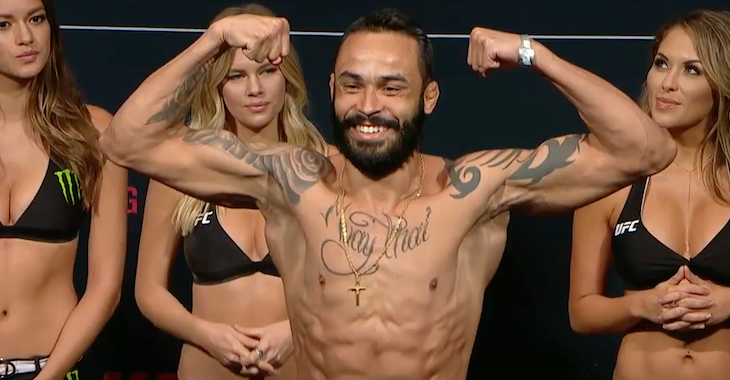 Last month, the UFC returned to beautiful Vancouver, BC, Canada with UFC on Fox 21. On the undercard of that event, Brazilian prospect Felipe Silva improved to 8-0 with a blistering, first-round knockout of kickboxing export Shane Campbell.

Fresh off this fantastic win, Silva is attempting to take his destiny into his own hands rather than sit back and wait for the UFC matchmaking team to tell him what’s next.

In a recent interview with MMAFighting’s Guilherme Cruz the Brazilian prospect was asked who he’d like to fight next. His answer? Popular 20-year-old prospect Sage Northcutt.

“I think it’s soon to go out calling other athletes out, but I’d really enjoy fighting Sage Northcutt,” Silva told Cruz. “We’re both high-level strikers and that’s what I seek in the UFC. Ever since he got in the UFC, he only fought fighters that ran away from the stand-up fight and tried to take him to the ground and he couldn’t show his striking in the UFC, and I think I’d be a great test for him standing.”

Since joining the UFC in October of 2015, the young Northcutt has already assembled an impressive 3-1 record, sandwiching a loss to Bryan Barberena between defeats of Francisco Trevino, Cody Pfister and Enrique Marin. And while many fans and pundits believe the young fighter is a tad overrated, Silva begs to differ.

“I don’t think he’s overrated. I do think he’s a great talent,” Silva said of his prospective opponent. “He’s only 20 years old and already has three UFC wins. I want this fight because I know we will both stand and fight, and that’s what I always want.”

Of course, while Silva’s desire to test Northcutt on the feet is probably legit, he’s also surely aware of what a win over a big name like Northcutt will do for his career. Albeit it to a far lesser extent, this is the same reason so many fighters call out Conor McGregor.

So, is this a fight you’d be interested in seeing, or would you prefer other matchups for the two rising fighters? Sound off, PENN nation!