Home » MMA News » Rousey vs. Kaufman In The Works For Strikeforce Wo... 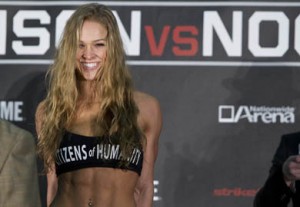 Ronda Rousey will be looking to continue her winning streak by successfully defending her Strikeforce Bantamweight Title for the first time this summer.

After defeating Miesha Tate at a Strikeforce event in March 2012, and with Cyborg Santos sidelined due to suspension, Ronda Rousey is now expected to face top-contender Sarah Kaufman at a Strikeforce card in August that has yet to be announced. The date and location are not yet confirmed, but with UFC events booked for August 4th and 11th it’s a safe bet that the event will take place in the second half of August.

Ronda Rousey (5-0) is on an absolute tear in Strikeforce. After winning four straight fights by armbar in the featherweight division, she was set to make her bantamweight debut against then Strikeforce Bantamweight Champion Miesha Tate. By the time the fight hit the ground it was all Rousey’s fight to win and Tate’s to lose. Miesha Tate did a good job defending the armbar for a bit, but she ultimately succumbed to Rousey’s ground game. Rousey did not hesitate in wrenching the armbar, resulting in a brutal image that will be in her highlight reel for years to come.

Sarah Kaufman (15-1) earned top spot as the number one contender when she defeated Alexis Davis on the same card in March 2012. Although a brown belt in jiu-jitsu, Kaufman tends to utilize the power she has in her hands. She possesses ten wins by way of knockout and only five by decision. Ironically, her only loss was to Marloes Coenen by Ronda Rousey’s favorite move: the armbar.

While the bout has yet to be confirmed by either camp or Zuffa, this is expected to be Ronda Rousey’s first title defense.