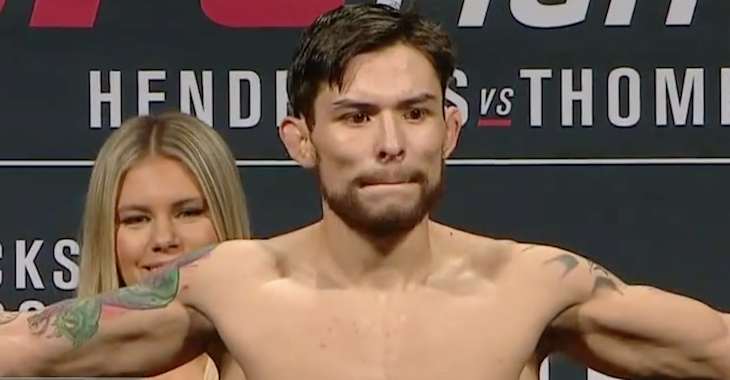 Yesterday morning, UFC flyweight king Demetrious “Mighty Mouse” Johnson made waves by releasing a lengthy, anti-UFC statement, slamming the promotion and its president Dana White for trying to force him into a fight with former bantamweight champion TJ Dillashaw. In this statement, the champ suggested that he was more interested in fighting established flyweight contender Ray Borg.

Since then, Borg has weighed in on the situation. He says he’s gained respect for the champ for striving to fight flyweight contenders rather than seeking more lucrative fights with fighters from other divisions.

“That’s actually where I gained respect for him,” Borg said on Monday’s episode of MMAjunkie Radio. “And some fans are seeing it. Because he is respecting the division, and the rankings, by wanting to fight me.”

“I think it’s proper for DJ to fight the contenders in his division,” Borg continued. “And then eliminate, do what he’s got to do. And then super fights can happen when it’s a champion vs. a champion.

Despite the fact that he agrees with Johnson, Borg assured that, whether the next shot goes to Dillashaw or not, he will ultimately get the fight he wants with the dominant flyweight king.

Who do you think deserves the next crack at Mighty Mouse? Ray Borg, TJ Dillashaw, or perhaps somebody else?