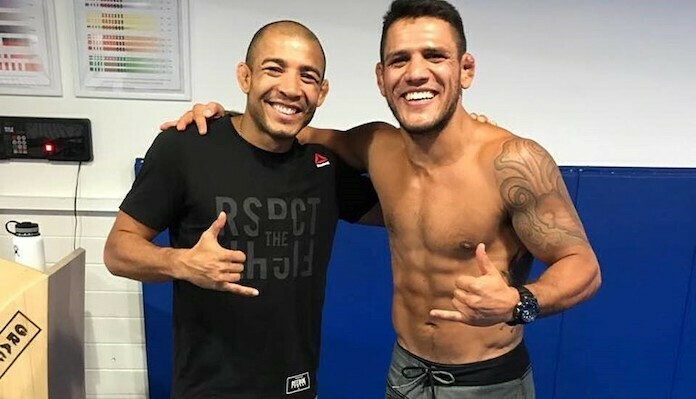 Rafael dos Anjos will be training with a fellow MMA legend in Jose Aldo as he prepares to return to the lightweight division, where he was once the champion.

After this hot-and-cold welterweight run, the Brazilian legend elected to return to the lightweight division, where he was the champion from 2015-2016, for a fight with Islam Makhachev at UFC 254.

As dos Anjos prepares for this fight, he’s expected to train with former UFC featherweight champion Jose Aldo at the famed Nova Uniao gym in Rio de Janeiro. Aldo, who is widely regarded as one of the best fighters ever, recently embarked on a dramatic weight-class change of his own by dropping down to the bantamweight division.

“I can anticipate that he is coming here, he will do his training in Rio de Janeiro, inside the gym together with us,” Aldo told AGFight this week, laying out plans to train with dos Anjos.

“I hope to be able to help him win in the lightweight division and, right now, aim at the belt dispute that is his objective. I think he fights with Islam Makhachev, so that’s it for now. You can be sure that, with the amount of lightweights we have, we will meet his needs.”

While it’s been many years since Rafael dos Anjos fought in the lightweight division, he looks to be in tremendous shape as he prepares to make the cut back down to 155-pounds. The former champion gave fans a peek at his current condition in a recent Instagram post.

Pain is only temporary but victory is forever🙌🏼🇺🇸🇧🇷 As dores passam, mas as vitórias são para sempre🙌🏼

With Jose Aldo behind him, how do you think Rafael dos Anjos will look when he fights Islam Makhachev at UFC 254?