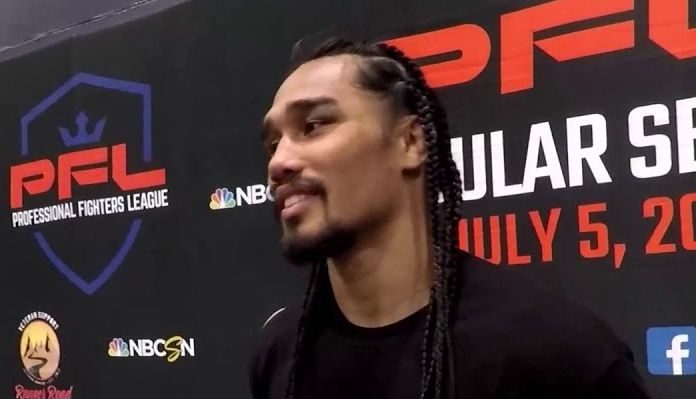 The Professional Fighters League (PFL) is about to finish their first season on New Year’s Eve. PFL decided to take MMA back to where it started by doing a tournament format. The tournament was structured like most other professional sports leagues, with a regular season, playoffs and then the finals.

Ray Cooper III took part in the PFL’s first season and will be taking on Magomed Magomedkerimov in the welterweight final for the $1 million prize money. Ultimately, the first season of PFL can be chalked up as a success. It brought a fresh new feel to MMA. As well, fighters didn’t have to call for their title shots, rather simply earn them. That is something that intrigued Cooper III to take part in the PFL.

“I think we’re gonna take over UFC. This is the future of MMA and I’m excited for what the future has to offer. Next year, I’m hearing more guys are gonna be in the tournament so it’s gonna be awesome,” he continued. “We’re gonna change the game and the fighters are gonna get paid well. Yeah, we got around like four to five months of a break. Rest your body. Still gotta be training for the next season. It’s awesome, it’s not like you’re gonna be out for so long not making any money so I’m glad. In the UFC they don’t fight for what, eight months or a year? So this is real good how we just take off for four months and we’re right back in it throughout the season and it’s gonna be awesome, bro.”

The tournament style has worked before in MMA. In the past the UFC have done it. Meanwhile, Bellator MMA’s heavyweight grand prix is nearly finished, while the promotions welterweight grand prix has just started. In addition, ONE Championship has announced plans for flyweight and lightweight tournaments for 2019.

There is no question fans love the tournament style in MMA. PFL surprised many this year with how well it worked, and is proving that MMA can follow a regular season and playoff format. Really, it is only good news for fighters that another promotion is out there to pay and employ mixed martial artists.

Do you agree with Ray Cooper III that the tournament style will soon take over MMA?