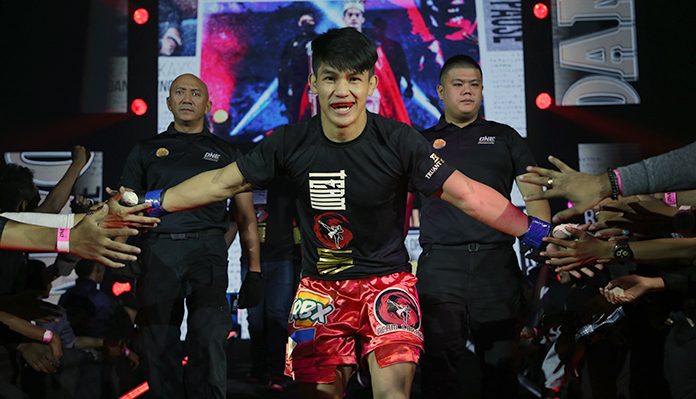 The Philippines’ Danny Kingad may not be where he’s at in his life today if it wasn’t for the discipline he learned through martial arts.

He was only eight years old when his father passed away. And like most troubled youth, Kingad ended up with the wrong crowd and picked up bad vices at a young age. Fortunately for him, he met Team Lakay Coach Mark Sangiao who pushed him towards the life of a martial artist.

The moment he donned a pair of gloves and started kicking the pads was what signalled the start of a new chapter in his life.

“Back then, I was such a mess as a teenager growing up. I fell into a bad crowd. Martial arts was a huge influence. The biggest thing that martial arts gave me was discipline. With hard work and discipline, I have accomplished so much.”

Winning nine out of 10 bouts so far in his professional career, today Kingad has become one of the most notable athletes in his division. His footing is so established that he was chosen to participate in the highly-anticipated ONE Flyweight World Grand Prix which kicks off this 31 March at ONE: A NEW ERA in Tokyo, Japan.

Kingad recently revealed that the main ingredient to his success is discipline.

“If you want to win, if you want to succeed, then you should have the dedication and the discipline to put in the long hours at the gym and never miss a day of training,” Kingad said.

“If you train correctly and regularly, then it becomes a part of your life. Study every aspect very well and do your due diligence.”
Thanks to martial arts and his teammates at Team Lakay, fans who will be watching ONE: A NEW ERA will witness a better version of Kingad as he faces Pancrase Flyweight Champion Senzo Ikeda in the quarter-finals of the aforementioned tournament.

A victory would catapult him into the semi-final round, where he will get the chance to make a finals berth. But discipline alone isn’t what got Danny Kingad this far. The Baguio City native says he is fortunate enough to be surrounded by an amazing support system.

“It also helps that I have a great coach and a team who helps me out every single day, even if I don’t have any upcoming match,” Kingad concluded.

“I am constantly in training, learning, and growing. I am blessed to have such an amazing group of guys, that I am surrounded by World Champions, and that I am absorbing everything that I can from them.”