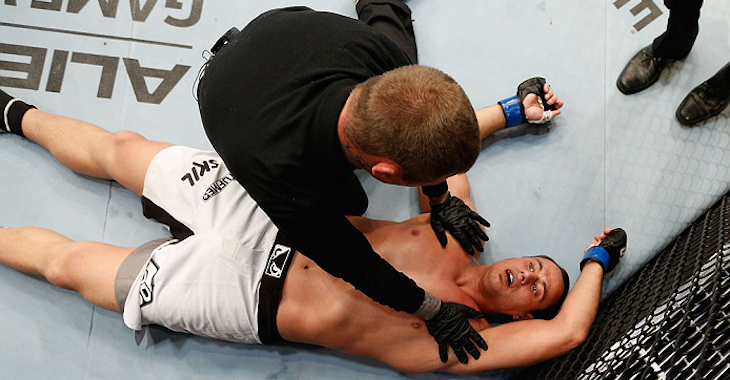 We’re now just a few months away from the UFC’s November 12 debut in Madison Square Garden, which will mark the culmination of a hellacious battle to legalize mixed martial arts in the state of New York.

As we celebrate the imminent arrival of the UFC in New York, however, the New York State Athletic Commission has confirmed a decision that is likely to drive many boxing promotions and small-time MMA promotions out of the state altogether.

As explained by Jesse Gillette of BloodyElbow.com, the commission has announced that, henceforth, New York combat sports promoters must provide “health insurance coverage amounting to $50,000 per combatant in addition to a $1 million guaranteed coverage per fighter in the event that a fighter suffers a traumatic brain injury.”

This is a whopping increase from the minimum medical insurance coverage promoters were previously required to provide, which was just $10,000 per fighter.

When asked about the cost of a $1 million insurance policy by MMA insider FrontRowBrian, New York based journalist Jim Genia offered a low-end estimate of about $750 up front per fighter.

.@FrontRowBrian Various numbers have been floated around, but it sounds like $750 per fighter up front is the most optimistic quote.

While these new costs are just a drop in the bucket for big-time MMA promotions like the UFC and Bellator, who is also plotting a trip to New York in the near future, smaller MMA promotions are likely to have a hard time coping with these costs. World Series of Fighting, for instance, who have booked Madison Square Garden for a New Years Eve show, are probably not happy about this news. Boxing promotions, similarly, which are already in the midst of a mass exodus from the state, are also likely to be hurt by this decision.

As boxing promoter Bob Arum put it in an interview with ESPN.com:

“Paying the premium on that policy is probably more than the gate receipts you can take in on some cards so if that stands we couldn’t do shows there. I don’t even know if they can find a company to write a policy for that. If they can’t, that’s sayonara for New York boxing.”

Wednesday’s regulatory changes can be found in their entirety on the New York State Athletic Commission’s website.

What do you think about this decision from the NYSAC? Sound off, PENN nation!