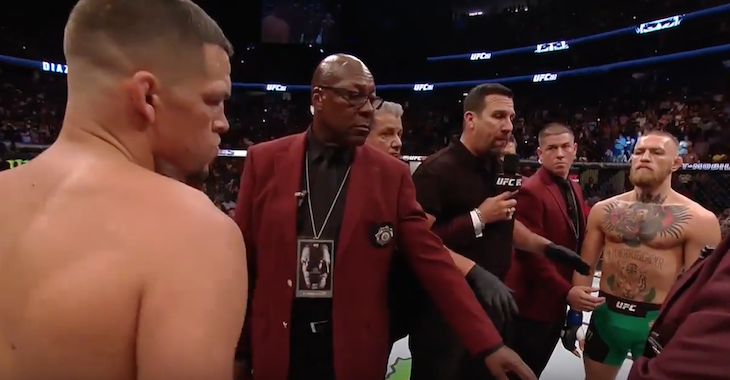 In the main event of UFC 202, Nate Diaz and Conor McGregor put on arguably the greatest fight in MMA history as the two battled over the course of 5 rounds to a decision.

The featherweight champion was given the nod on two of the three judges scorecards, earning him a majority decision win, and avenging his UFC 196 submission loss to the Stockton superstar.

Following the fight, Diaz stated that he had several injuries that occurred during camp which hindered his performance on fight night. In a recent interview with Submission Radio, Diaz’s boxing coach, Richard Perez, spoke about the injuries Diaz was referring to:

“They were bad. The knee was bad and the ribs were bad because when he hurt his knee, he couldn’t run. So then when it got a little better, he wanted to start sparring. And he’s not in shape because he wasn’t really doing much. You know, you work on a little bit of mitts and you work a little bit of sparring and he got better and better. And then when he got (Alan) Sanchez in there, he went a good four hard rounds and he was doing real good, but he was getting a little tired, and that’s when Sanchez caught him in the rib and that then put him out there for a while.

“So he can’t back out of the fight. And so I know that if he wouldn’t have been injured, McGregor would have gotten stopped again and Nathan wouldn’t have got hit as much as he did in that first round this last time. Because he was really sharp. He was sparring with guys McGregor’s size, really good boxers and he was whooping on them. So that’s why I knew it wouldn’t happen that way. But it did, and it came out as the best fight of the night. But he got cut, you know, and if there would have been another 30 seconds, he would have tapped him out, cause McGregor was ready to go anyway.”

Since the fight, while the MMA community has been very vocal regarding their desire for a trilogy fight, UFC President Dana White has remained adamant that an immediate trilogy fight doesn’t make sense.