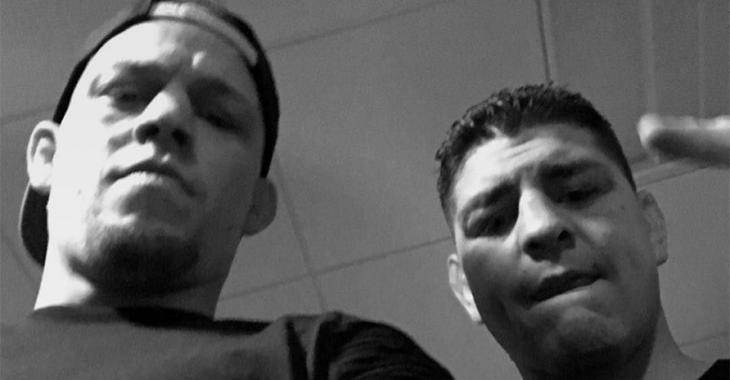 Nate Diaz has stayed true to himself since day one.

Even with making the most money of his career in his last two fights that were some of the most successful pay-per-view events in UFC history with Conor McGregor, you won’t see the Stockton scrapper wearing any new tailored suits. “People who treat it like it’s a business, wearing a suit, acting a certain way, like (Tyron) Woodley and (Stephen) Thompson, they’re so boring,” Diaz told Martin Rogers of USA Today. “You guys are acting in a certain way you think you should be acting to be professional, but the best example of a professional fighter is me and my brother (Nick).”

Nate and Nick both have stuck to their roots with a filterless no-nonsense, no-bullshit attitude, which has gained them both a huge fan following. It’s going even further now with Nate making his way to the big screen, promoting the movie Fist Fight, which features stars Charlie Day and Ice Cube. Although Diaz got in with the promotion for the movie, Nate says it wasn’t with any help from the guys at the UFC. Nate said the UFC actually urged the movie crew to go with Conor McGregor or Georges St-Pierre instead.

“The UFC is like, ‘We’re thinking GSP or Conor McGregor,’ ” Diaz said. “My guy said, ‘Don’t worry, we’re going to use Nate.’ They came back to say, ‘We really think you should use GSP or Conor.’

“I don’t know what it is. I’m not a white boy with blue eyes or great looking, I talk all (messed) up. I’m not the look they’re going for, but this is fighting. You don’t go for a look. You go for the baddest that’s out there. This is an example of my whole career.”

Nate Diaz has stated that he only wants fights that are going to be a big deal. Apparently, former UFC lightweight champion Eddie Alvarez, who just lost the belt to Conor McGregor isn’t quite the big deal fight Nate is looking for. Who would you like to see Nate fight next? Let’s hear it in the comment section!