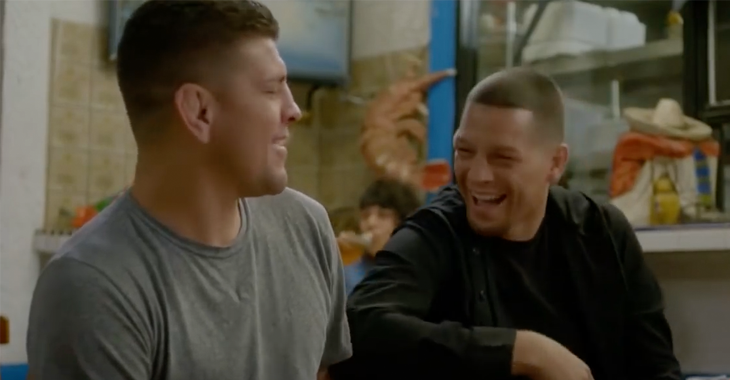 Nate Diaz is one of the brightest stars in the UFC, especially after his pair of fights against current UFC lightweight champion Conor McGregor.

The product of Stockton, California along with older brother Nick are known for their attitudes of keeping things real, paired with their elite fighting abilities. However, even with their loyal fan bases, Nate says that his stock could be much higher if the UFC jumped on board and pushed he and his brother like they have done with other fighters.

“Why aren’t we on blast everywhere? Can I be marketed? Why am I not on the f—king Wheaties box? Look at the Wheaties box right there — more people know me than him,” Diaz said in his special edition of The MMA Hour pointing out Anthony Pettis’ Wheaties cereal box (transcribed by Bloody Elbow). “How come when I go to UFC on FOX, all these dorks are on the wall? Can I get a picture on the wall? Can I get promoted and marketed in a positive way?”

“Like I said, I race, I’m a vegan, I do triathlons, I f—king teach kids. But all they want to do is (promote) middle fingers and hide me out in the dark corners still.”

“They try their best to not talk about us. It’s like, as soon as somebody says ‘who’s the stars?’ they’ll purposely not say me and Nick,” Diaz added. “But we’re still getting invited to huge parties. They’re still calling. The only ones who ain’t calling are you. We’re not going away.” Nate also brought up that the UFC didn’t even attempt to try to arrange anything for UFC 209, which is the area code that the Diaz brothers are from and always proudly represent. Nate believes that it may have been an “ego thing the UFC was playing” with not seeking them for the UFC 209 card as fans were all calling for it on social media.

“I think it would’ve made sense,” Diaz said. “Like I said, I don’t want to fight nowhere, but it’s what should’ve happened. Right? Isn’t it what should’ve happened? Shouldn’t they have done that? Everybody was expecting it already, why wouldn’t they have not tried to make that happen? They didn’t even attempt it. They just want this to die out. They want me to die out and go away.”

Do you agree with what Nate Diaz has to say on the subject? Let’s hear it in the comment section!