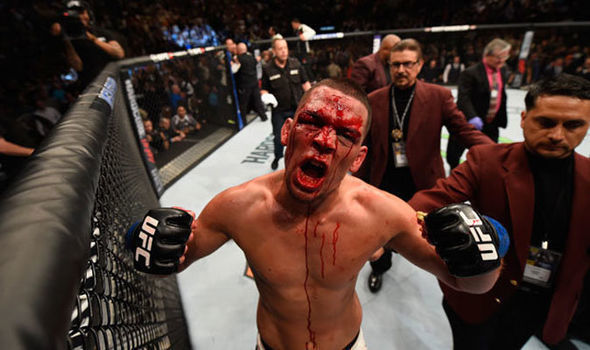 After going on a social media tirade in true Diaz Brother fashion, it seems Nate Diaz is ready to get back in the Octagon. The return would mark the first time Diaz has stepped into the Octagon since dropping a majority decision to Lightweight Champion Conor McGregor almost a year and a half ago at UFC 202. Since the social media announcement, we’ve seen fighters flock from multiple weight classes looking to get the shot at fighting the famed Stockton native known for his consistently entertaining wars inside of the Octagon and for being the only man to defeat Conor McGregor in the UFC.

As reported by BJPenn.com’s own Chris Taylor, Nate Diaz is interested in saving UFC 222 after an injury Featherweight Champion Max Holloway suffered forced him to withdraw from the card. The UFC is scrambling to put the pieces back together and Diaz may be just what Dana White and company are looking for to get the PPV attraction back on it’s feet. Here are a few matchups for Nate Diaz that make sense for both UFC 222 as well as the immediate future should the bout take place at a later date:

When Nate Diaz announced he would be making a return to fighting in the near future, Eddie Alvarez was one of the first to call him out, going as far as to give a timetable as to when they could possibly fight. Diaz and Alvarez have a history of bad blood dating back to UFC 188 in June of 2015. After Alvarez took a decision over Diaz’s teammate Gilbert Melendez, Nate confronted Alvarez in the back who had some choice words for Diaz as well. Alvarez stated he wanted a fight with Diaz back then and it seems old grudges die hard as Alvarez is still looking to land this fight almost three years later. Diaz was later met with criticism by Alvarez after Alvarez caught wind via a mutual friend of both he and Diaz that  Nate was no longer interested in fighting Alvarez due to the former champion’s loss to Conor McGregor dating back to November 2016.

Regardless of Diaz being seemingly uninterested in a fight with “The Underground King”, the fight is intriguing to fans and media members alike. Alvarez has stated that this is still the fight he’s pushing for regardless of Nate’s comments. Could the matchup be a potential Main Event replacement for UFC 222?

Put yo money up then @NateDiaz209 Or shut the fuck up and go back to riding bikes around the park https://t.co/g0DrhPY2zR

Lightweight contender and former Interim-Title Challenger Kevin Lee was next to throw his name in the hat for a potential matchup with Nate Diaz. His comment was a bit less tame then Eddie Alvarez’s approach but Lee has always fancied himself a trash talker, a tactic he used extensively leading up to his interim-title fight with Tony Ferguson. Lee hasn’t entered the octagon since that October loss to Tony Ferguson and had stated he planned on taking some time off, but it seems a matchup against Nate Diaz is just what the former title contender needed to get back into the mix of the lightweight division. Kevin Lee has made his name in the lightweight division taking advantage of his natural grappling prowess where he was able to finish 4 of his 5 opponents leading up to his interim title opportunity against Tony Ferguson. Grappling is no stranger to Caesar Gracie Jiu-Jitsu black-belt Nate Diaz and fight between the two submission specialists would surely be a treat for fans, not to mention the trash-talk filled mental warfare leading up to the contest.

One name that no one would have connected with Nate Diaz is Cub Swanson. Cub is coming off of a disappointing loss to featherweight contender Brian Ortega in a Main Event bout at UFC Fight Night: Fresno. Leading up to the fight, Cub stressed the importance of coming out on top as the bout served as the final fight of his contract and would be vital to having leverage in his renegotiation process with the UFC. Cub didn’t come out on top but he has a chance to redeem himself if he lands a fight with Nate Diaz in a bout serving as the saving grace of UFC 222. When news broke that Diaz was in fact interested in taking a short notice bout for the event, Cub chimed in saying he was ready to take the fight with Diaz if the UFC would oblige. Given that Swanson is a featherweight staple, a short notice bout against Diaz at lightweight would seemingly work out well for Swanson given he wouldn’t have to cut nearly as much weight that he’s become accustomed to to make the featherweight limit. Swanson and Diaz are both known for their wild fights inside the octagon and a matchup between the two would surely result in fireworks, no matter the result.