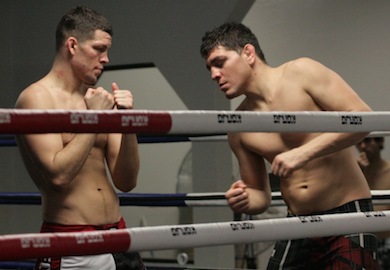 Nick Diaz wants $500k to return and says he doesn’t even like fighting. Nate Diaz says he’s embarrassed of his pay and wants a new contract or a UFC release.

These two brothers are the most popular fighting duo in the sport today. Each man, in his own right, has elite level martial arts skills, an exciting fighting style and a massive, nearly unmatched fan base.

It’s hard to find a fight fan who doesn’t want to see these guys back in action. But the UFC isn’t interested in paying these guys more money to secure their participation going forward.

With this stalemate at hand, and the UFC holding all the cards, should the just buck up and pay Stockton’s sons what they truly deserve? Or are the Diaz brothers off base with their expectations?