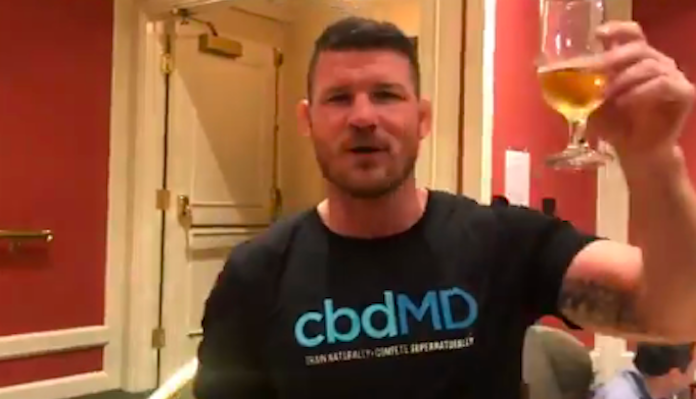 For former UFC middleweight champion and current MMA analyst Michael Bisping, this is a pleasant turn of events. The Brit, after all, has had a number of fiery exchanges with Covington in the past — including one right after Covington capture the interim title at UFC 225 in June.

Speaking to Mike Bohn of MMAjunkie.com, Bisping reacted to the Woodley vs. Till news, and to Colby Covington getting stripped of the title as a result.

Peak @bisping here as he reacts to @darrentill2's title shot and @colbycovmma being stripped. Better damn well watch this. pic.twitter.com/YOst2yAGDv

“Darren Till, first and foremost, good luck my friend,” Bisping began, discussing the Woodley vs. Till fight. “Go out there, represent England — but screw England, he’s doing this for himself, and I think he’s got a very good chance of winning this fight. Tyron Woodley, of course, is an incredibly tough opponent. He’s a dominant champion, and he’s great, he is, all around, as is Darren.”

“‘Wonderboy’, Till… very similar opponents, so I see the fight playing out very, very similar,” Bisping continued, referencing Woodley’s fights with Stephen Thompson. “The Woodley-Wonderboy fights were close. I think this fight will be close as well. I think they’ll be very similar fights.”

Bisping then commented on the circumstances of the fight — including the fact that it means the UFC will strip Covington of his interim title.

“The circumstances around [the fight]? I always say the belts aren’t worth the leather that they’re printed on and this highlights it,” Bisping said. “That’s not disrespecting the UFC, that’s their business and they’re going to do what they’ve got to do. That’s why I threw my belt on the floor against Robert Whittaker. That’s why I told Colby Covington to take a long walk off a short pier when he talked shit on that [post-fight show]. Everyone was like ‘he just won the belt, how can you talk shit?’ I said ‘no he didn’t win the belt. He didn’t just win the belt!’ And here we go. Did he win the belt? Is he the champion? No.”

“Colby Covington, good luck going to President Trump with empty hands. At least I’m holding a beer. What are you holding?”

What do you think of these comments from Michael Bisping?