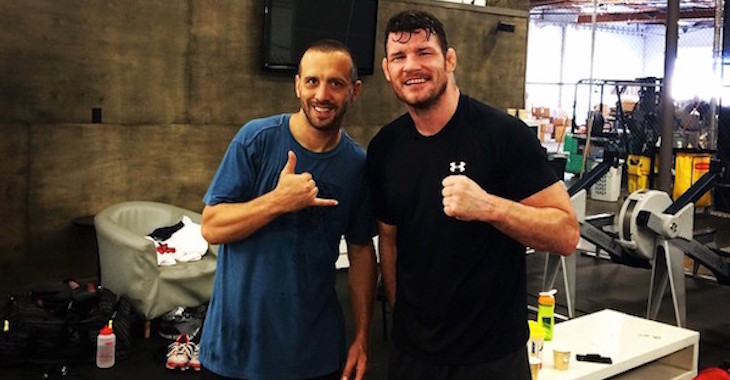 Prior to beginning his training camp, “The Count” decided to take his family on a Hawaiian vacation to the beautiful island of Maui.

Unfortunately for the British champion, the family vacation had some serious low points including being robbed and almost drowning.

Bisping recounted both of the scary and unfortunate events during his “Believe You Me” podcast (as transcribed by MMAFighting).

“We walked up to the car (after visiting a local waterfall), and [my son] Callum said ‘someone smashed the window,’” Bisping said. “I thought he was kidding, ‘the little f*ucker,’ but lo and behold, [someone] smashed the window. My wife had left her bag in the trunk, [they] smashed the window, grabbed that and all the clothing, of course we were swimming, so I just had a tiny pair of shorts on, my wife was in a bikini. That’s kind of how we were dressed. All the clothes, stuff like that, all stolen, including my wallet, everything.”

Bisping opted not to return his rental car that same day and wouldn’t you know it, a second robbery took place while in valet parking.

“The hire car, we were supposed to take it right back, but you don’t want to waste a half a day, taking a f*cking rental car back,” Bisping said. “So I’ve yet to do that. We drive around with a smashed window and we got robbed a second time. My running shoes and stuff like that, I left them in the next day and when we got back the car back, someone had stuck their hand in and taken the running shoes.”

Finally free of drama, or so he thought, Bisping and his family joined former UFC fighter and Hawaii native Kendall Grove for an afternoon of paddle boarding and adventure. It was during this time that Bisping suffered another scary experience.

“We went out with Kendall Grove and his family,” Bisping said. “We went out to the beach, great day. We had kayaks and paddle boards, stuff like that. So we say, let’s go out on the paddle boards and go out to that cliff [in the distance].”

Everyone made it safely to the cliff area and some members of the family took time to leap off of the peaks and into the water. On their journey back to shore the winds picked up and caused some problems.

“The wind’s picking up, we better head back,” Bisping said. “It’s me and my daughter on a paddle board. Balancing on a paddle board is not my forte, let me tell you that. Especially when there’s two people on there and the winds are blowing.”

“We’re pretty far out, the cliffs were 200-300 meters away and we’re drifting further and further out. I’m like ‘holy s*hit,’ I don’t want to say anything to my daughter but I’m panicking a little bit, you know what I mean?”

“I jump off, my daughter’s on the paddle board, we’re drifting further and further out to sea,” he said. “I’m trying to swim and I’m starting to panic, we’re getting nowhere.”

To make matters worse, two elderly female swimmers were also in distress, and came over and clung Bisping’s paddle board. Thankfully help would eventually arrive, but there was only enough room for the two elderly women and Bisping’s daughter.

“Me being a macho d*ckhead, I go ‘yeah yeah yeah I’m fine, I’ll swim back,’ because I assume there’s no room for me,” Bisping said. “So they all disappear, go off in the distance and I’m thinking ‘I don’t f*cking believe this, me, and my ego, rather than just say ‘I need help also,’ I’m going to drown now.”

Eventually the lifeguards would return to help the middleweight champion of the world get back to shore.

“That was me yesterday. Fun times.” Bisping stated.