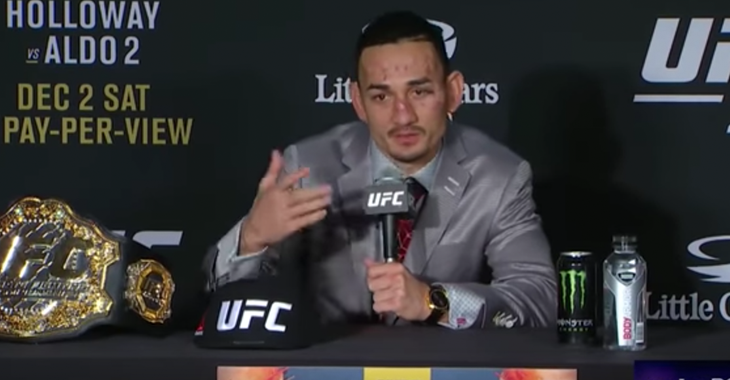 The two met in an immediate rematch with Frankie Edgar having to pull out of the originally scheduled title fight against Holloway due to an injury. Just like their first fight at UFC 212 in June, Holloway finished Aldo in the third round by TKO.

Following his first title defense, Holloway gave praise to his Brazilian opponent for what he has accomplished in his career.

“I recently heard Jose Aldo’s motivation for the fight was his daughter and me being a parent with my son, I get it. But that guy has to know he doesn’t have to owe anybody anything, you know,” said Holloway (transcribed by Adam Guillen Jr. for MMA Mania). “That guy is one of the greatest of all time and I think Brazil should be building statues of him in all of the favelas, man. He’s a legend, he’s a GOAT and I got a lot to fill,” said Max. With his second win over Aldo, “Blessed” sent a warning to his past opponents that want to have another go at him in the Octagon.

“I told you guys before, there is a quote going around; if I beat you one time, the second time is going to be worse. And the third time, you should rethink your life about accepting the fight,” Holloway said.

“That’s just joking, but after the first round I walked up to Anik and Rogan and told him he’s tired already. I dropped my hands and told him to punch me. I dare him to punch me. He landed some shots but mines seemed to hurt him a little more. Everything went my way tonight, but like I said the guy is a GOAT and nothing but respect to him, his family and all of Brazil,” Holloway said with respect.