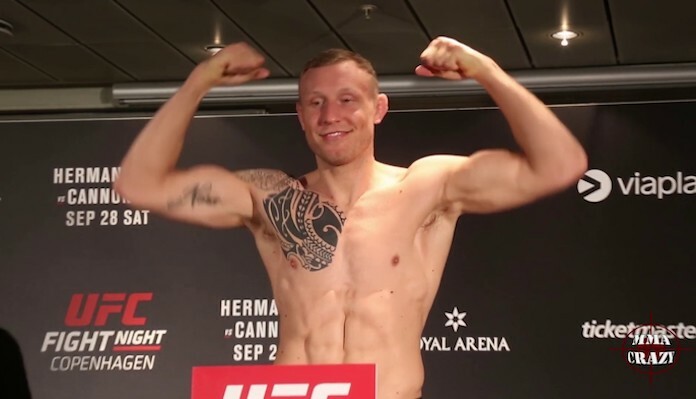 On Saturday night, the Ultimate Fighting Championship will return to our screens with the under-the-radar UFC Vegas 16 card out of the promotion’s Apex facility.

The card was originally expected to be headlined by a middleweight fight between Jack Hermansson and Darren Till. When Till was forced off the card, Hermansson accepted a short notice fight with Kevin Holland, who was ultimately also forced off the card after testing positive for COVID-19. The UFC then made a third attempt at finding Hermansson an opponent, matching him up with Marvin Vettori, who had originally been scheduled to fight Ronaldo “Jacare” Souza next weekend. The third time seems to have been the charm.

The UFC Vegas 16 card will be co-headlined by a light heavyweight scrap between Ovince Saint Preux and Jamahal Hill. Other highlights include a lightweight scrap between Gabriel Benitez and Justin Jaynes, a flyweight fight between Montana De La Rosa and Talia Santos, and a number of other compelling matchups.

On Friday morning, the 22 fighters on the 11-fight UFC Vegas 16 bill stepped onto the scales to weigh-in for battle. Despite all the shakeups to the main event, both Hermansson and Vettori hit their marks at 185.5 and 186 respectively. See the full weigh-in results for the card below (via MMA Junkie):

* Saint Preux was fined 20 percent of his purse

Which fights on the UFC Vegas 16 bill are you most excited for? Let us know in the comments section.