Luke Rockhold forced out of UFC 268 due to injury

Luke Rockhold’s return to action will have to wait after the middleweight star announced that injury has ruled im out of his UFC 268 clash wish Sean Strickland.

“There’s no easy way to really say it, but the fight is off in New York,” Rockhold said on his Instagram story. “I ended up herniating a disc in my back. L4, L5. The docs say it’s nothing I can play with. I need to do some treatment and recovery time.”

“Some things just aren’t meant to be. New York, motherf*cking New York. I’m sorry to the friends and the peeps and everyone, but we’ll be back. Until next time,” added Rockhold.

Luke Rockhold is out of his fight with Sean Strickland pic.twitter.com/bLAERoAiCh

The news comes as a massive blow to both Luke Rockhold and his fans. ‘Rocky’ was last seen competing at UFC 239 in July of 2019. The AKA fighter suffered a knockout at the hands of the current light heavyweight champion, Jan Blachowicz. Following an unsuccessful leap to 205lb, Rockhold was due to make his return to middleweight on November 6th against Strickland.

Rockhold’s last win at 185lb came in 2017 against David Branch where he scored the second round knockout at UFC Fight Night 116. As a former champion with more than 850k followers on instagram, the 36 year old is still a draw in the sport. Once healed, it will be interesting to see if the UFC decide to try and remake the match with Strickland. There has been plenty of heat between the two fighters in the build up.

Speaking about Strickland on the MMA Hour recently, Luke Rockhold had said “I want to shut this kid down and shut his mouth and put him away for good. Put him where he belongs back in the trailer park.”

Strickland will now have to wait and see if the UFC can find him a suitable replacement for the hallowed Maddison Square Garden event. As it stands, most of the top-ranked middleweights are already booked.

With the loss of Rockhold vs Strickland, the latest UFC 268 lineup now includes: 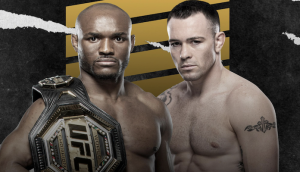