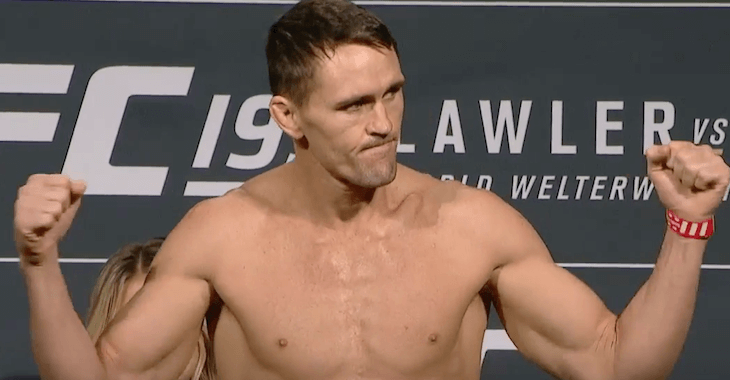 Last November, the UFC touched down in sun-soaked Melbourne, Australia with UFC 193. The card, which would see Holly Holm upset Ronda Rousey with a second-round head-kick, entered the history books as the most attended event in UFC history with an audience of 56,000 fans.

Earlier this month, news broke that the UFC would be returning to the Australian city on November 27, just over a year removed from the historic UFC 193.

As of now, the Australian card’s lineup is a mystery. That being said, it’s a safe bet that many of Australia’s top talents will be pencilled onto the bill in the not-too-distant future. One such talent is 36-year-old veteran Kyle Noke (22-9-1), a native of the Australian province of New South Wales, and a current member of the UFC welterweight roster. In fact, Noke has already begun campaigning for a spot on the card, and he even has an opponent in mind.

If he has his way, he’ll be taking on 7th-ranked welterweight Neil Magny (18-5).

Noke’s last two bouts have seen him lose a split decision to the debuting Alex Morono, and tap to a Keita Nakamura rear-naked choke. Needless to say, the Australian is in a bit of a tight spot, and is obviously eager for the chance to bounce back. A win over Magny would provide him with that chance.

Magny, after all, remains one of the welterweight division’s top talents. Though he found himself on the receiving end of a Lorenz Larkin beatdown in his last bout, he’s still a strong 8-2 in his last 10 bouts—a streak that is highlighted by an unforgettable, come-from-behind win over Cuban-Australian slugger Hector Lombard, which happened to occur in Australia.

So, will Noke get this lofty wish, or is he destined for a lower-ranked opponent when the UFC returns to Australia? Let us know what you think in the comments below!