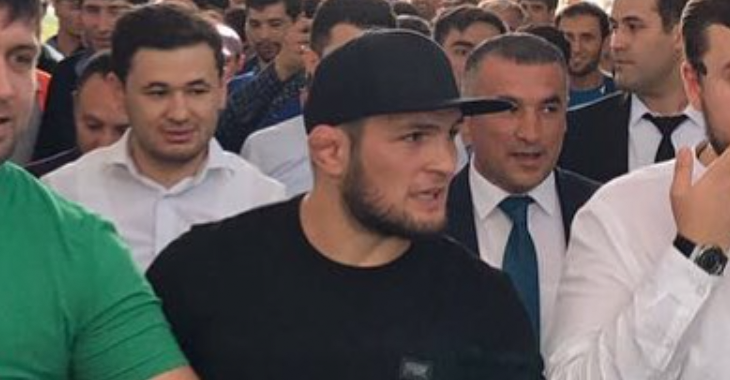 We have not seen current #1 UFC ranked lightweight Khabib Nurmagomedov compete since November of last year where he defeated Michael Johnson by submission in the third round. “The Eagle” was scheduled to fight #2 ranked lightweight Tony Ferguson in a UFC interim lightweight title fight at UFC 209 in March. However, Nurmagomdeov suffered weight management medical issues hours before the UFC 209 weigh-ins and was taken to a hospital and the interim title fight was canceled.

Since the mishap, Khabib has stated that he has been recovering from his medical issues suffered in March and was aiming to fight Ferguson first and then Conor McGregor in the Winter. McGregor has stated that a fight with Nurmagomedov in his home country of Russia is something that has his interest after his mega money fight with Floyd Mayweather in August. “The Eagle” has been out seeing his fans while on his recovery back to the Octagon. In Nurmagomedov’s social media posts, crazed fans are seen chanting his name and one insane fan thought it would be fun to get punched in the stomach by the lightweight contender.

While McGregor is busy with his fight in August against Mayweather, Ferguson has had a lot to say about rebooking their fight.

“I mean, you and your fuzzy hat, it’s all amazing and everything,” Ferguson said in a recent social media video post. “It’s great. But, I can’t wait to shut that hype train down. So, maybe if you’re lucky and you beg me enough, I might give you that one chance to get that belt against numero uno, right here. Until then, have fun making that weight cut.”

Will we see Khabib Nurmagomedov and Tony Ferguson fight in the Octagon soon? Let’s get your prediction for the matchup in the comment section!