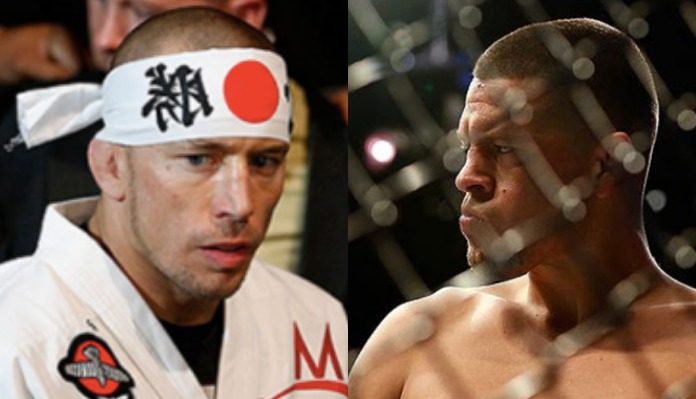 The news that’s gotten most of the buzz lately is that of a potential Nate Diaz vs Georges St-Pierre fight in which Dana White confirmed is what he would like to add to UFC 227 in Los Angeles, California on August 4th.

While the fight between the former two-division UFC champion and The Ultimate Fighter season 5 winner has yet to be made official, the news alone of it being in the works has confused people to an extent. One of which being a close friend and former training partner of GSP’s at TriStar, retired UFC veteran turned analyst, Kenny Florian.

Florian spoke with Submission Radio recently and discussed his reaction to the news as well as the interesting reaction from St-Pierre’s coaches.

“It’s interesting. I don’t have the latest on Georges and how he’s feeling. My understanding is that he’s been training again and my other understanding is that he really wants a big fight. Nate Diaz has confirmed himself as a big fight now. I think he’s a big superstar and he’s an excellent fighter, he’s been fighting a very long time. I don’t know if Georges is going to find that so interesting. I think he would probably want a rematch against Nick [Diaz] over Nate and possibly fight someone like a Tyron Woodley, but I don’t know. I think at this point in his career, Georges is looking for big challenges, new challenges. The fact that he might be going down to 155 pounds sounds pretty interesting, it sounds like it is a new challenge. I haven’t confirmed that with anyone in their camp. When I did bring it up to one of the coaches in that camp they seemed to be surprised and unaware about that news. But again, who knows?

The Nate Diaz fight, they [GSP’s coaches] weren’t really aware of it. And again, maybe they’re out of the loop, but my understanding is that they were taken by surprise and they didn’t really know that that was the fight that Georges was targeting or even wanted.”

Just from the early reactions, fans and fighters alike don’t seem too crazy about the idea of this fight and many have questioned what if anything it does for St-Pierre’s amazing legacy in the sport. Florian gave his take on how it could affect the future UFC Hall of Famer.

“I mean, it’s hard, right? Because Georges has done so many great things in this sport, he’s had so many great challenges. The latest, of course, winning the 185-pound belt after being the champ for so many years at 170 pounds. So, I don’t know if…and while Nate Diaz is a tremendous fighter, I don’t know if that’s the kind of thing that he looks back on and says, you know, that was one of the highlights of my career. I don’t know. And I don’t think Georges is motivated by money at this point, he’s motivated by the challenge. So, whether Nate Diaz is that challenge that’s going to get him to fight again, I’m not so sure.”

It’s no secret that Diaz wouldn’t be St-Pierre’s toughest challenge of his career and at this point, St-Pierre has made it clear that he only wants big challenges and has even stated in the past that a fight with Nate Diaz does nothing for him. Which makes this all the more interesting.