It is fair to assume that UFC President Dana White doesn’t receive a ton of calls from fighters who are begging to fight Justin Gaethje.

After all, Justin Gaethje (19-2 MMA) has proven to be one the toughest and scariest fighters on the 155-pound roster, this despite having just four fights with the promotion.

Although “The Highlight” has gone just 2-2 during his four octagon appearances, he has managed to earn a jaw-dropping six UFC performance bonuses in that time.

Gaethje’s durability and willingness to brawl were put on full display in losing efforts to Dustin Poirier and Eddie Alvarez over the past twelve months.

But it was most recently in August that Justin Gaethje reminded fight fans of his amazing power and overall ability, when he scored a nasty one-punch KO victory over James Vick.

Despite the fact that Justin Gaethje is coming off arguably the biggest win of his mixed martial arts career, “The Great” Alexander Hernandez believes the time is right for a showdown with “The Highlight”.

“Right now it’s Gaethje – that’s the guy who is available,” Hernandez told MMAjunkie. “Everybody else is booked up. I would love to take out that guy. I know I’m the best and I have to beat all these men to get to the top. I’m not going to discriminate against anybody; it doesn’t matter their name, shape or style. I just want a number.” 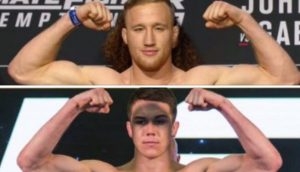 Hernandez would return to the octagon four months later at July’s UFC on FOX event in Calgary, where he earned a decision victory over Oliver Aubin-Mercier.

“I’ll leave my foot in his ass (expletive) – that’s the only piece of myself I’ll leave behind,” Hernandez said. “Our fight would either be a complete highlight-reel for me or it would be like all his other fights where it’s certainly a brutal match. I think I can approach this fight more intelligently and stylistically diverse than his other opponents. I can make it a highlight-reel for myself. I have a ton of respect for the guy, I know he’s dangerous as (expletive) so it could be a brutal war.”

Although a fight with Hernandez may not make the most business sense for the former WSOF lightweight champion, “The Great” believes if any man would give him the chance, it would be Justin Gaethje.

“A lot of people have trepidation toward taking certain matchups,” Hernandez said. “Especially against like me, who is young and coming up and they have a lot more to lose than gain fighting me just based on me being new on the scene and not having as big a pull of popularity as the other guys who have been around for a long time. Gaethje seems like a very game opponent. He’s always game to fight, he just needs time. I’m hoping he bucks up. Hopefully the UFC makes it happen.”

Would you like to see a fight between Alexander Hernandez and Justin Gaethje booked by UFC officials? Sound off in the comments section PENN Nation!