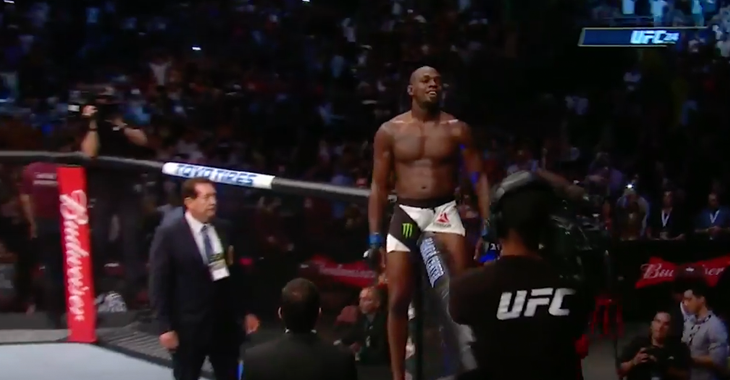 Few if any stories in 2017 were as big and jaw-dropping as yet another Jon Jones failed PED test was.

The former king of 205 initially was stripped of his title for a hit and run incident in 2015. Jones would eventually return for an interim title fight with Ovince Saint Preux at UFC 197 in 2016. He would then look for a quick turnaround after winning and look to unify the titles against his biggest rival, Daniel Cormier at UFC 200. Then Jones was busted once more for clomiphene just days before the fight.

Fast forward to July of 2017 and Jones was ready to come back again. Still to face Cormier who has acted as champion since Jones was stripped. Cormier would enter as the champion, but he would not leave as the champion. Jones would finish Cormier in the third round by way of knockout after a back and forth affair. But of course…disaster would strike again as Jones was busted a few weeks later and stripped once again.

Jones hasn’t fought since UFC 214 last July and is still awaiting his suspension from USADA but as investigations continue, some think Jones may not be gone for as long as assumed when the news first broke. Jones’ manager, Malki Kawa spoke to Luke Thomas today and got an update on the situation:

“By the end of this month I think we get some clarity on the issues. We have a hearing with the California State Athletic Commission and we’re hoping to get the investigation with USADA wrapped up by then, as well. Hopefully it all works out that way. I got to assume that by the end of March, for a fact, we will get this resolved and get an idea of what it’s looking like. I’d like to say about a 95-percent chance (he fights in 2018).

If USADA is a respectable organization, which I think that they are, and they take all the information they compiled, all the interviews that they’ve done and all the things they’ve seen, they know for a fact that Jon Jones was not cheating and he was not intentionally taking any kind of substance. I think they know that and everybody can come to that conclusion based on the circumstances of his situation. That’s the most I am going to say at this point because it is obviously on-going.”

The original guesstimate for what could be possible for Jones’ suspension was somewhere around four years. Will that be what it actually ends up as?