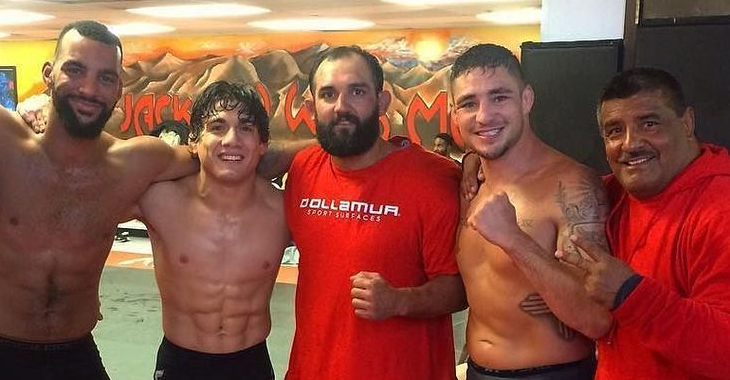 Johny Hendricks hasn’t had the best luck lately. He’s only been able to win four of his last 10 fights. Although considering that three of them were Georges St-Pierre, Robbie Lawler and Stephen Thompson, it’s understandable. A bad run coupled with difficulty cutting weight led Hendricks to jump up to middleweight, where he’s one-and-one. Johny Hendricks thinks he may have found what he needed to get out of his slump with a move to one of the best camps in all of MMA with Greg Jackson and Mike Winkeljohn.

“It started about a year and a half ago it just turned hard to get partners to come in and train. I could find boxers, but MMA is a little bit different than boxing, the distance and where to move your head and where you’re safe and where you’re not because you can throw kicks. And after that last fight, that was sort of the last straw that I was like, you know what, I got to get people, I got to get more than just one look. And my coach was telling me to go try a couple of camps out, and we talked to Winkeljohn and he said, “sure, come on out, try it out,” and I did, and after the first day I knew that from here on out that’s where I’ll be training, let’s just say that. Now, I’m gonna still train here in Texas cause I can’t leave my family for that long, right? But I plan on doing majority of my camp out in New Mexico.”

“I loved it, and I do love it. I think it’s been, you know, here in Texas we have partners but sometimes it’s hard to get partners. Whereas at Jacksons you have partners upon partners and people who want to train non-stop and that’s – once I showed up, they opened their arms to me and we just started working. And that’s sort of what I need, I need people that are gonna push me. And my coaches push me here, but I need the people as well, I needed the partners. And it’s so tough to beat a place like that when it comes to how many people they have. And not only that, but how many big guys they have that I’m able to work out with. The first day I showed up I sparred six different people, and there were still four people that wanted to go, you know, but class was over. So, it’s sort of a different vibe.” — Johny Hendricks speaking to Submission Radio.

Jackson/Winkeljohn have made a name of not only creating incredible fighters, but revitalizing careers. If Johny Hendricks thought he needed a change, he made a great choice. Hendricks is now surrounded by some of the best fighters on the planet as well as the infamous UFC wizard-behind-the-curtain, Greg Jackson. This move comes just before his next fight with Paulo Borrachinha at UFC 217, so we’ll be on the lookout for a new and improved Johny Hendricks on November 4th.