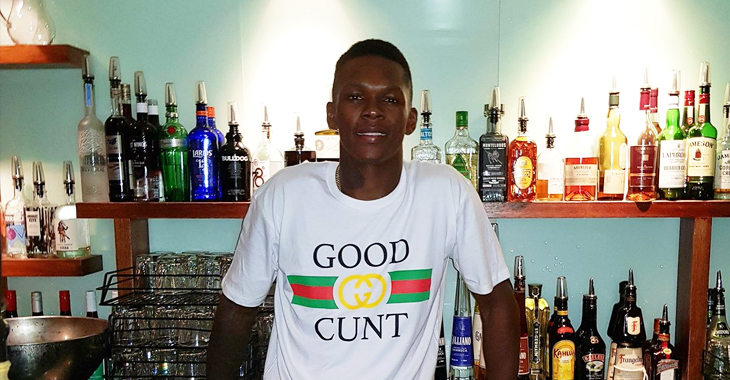 If you weren’t already one singing The Last Style Bender Israel Adesanya’s praises, after just one fight in the UFC he’s already got everyone talking about him. Between the way he talks and the way he wants, but more importantly the way he fights, he’s another young prospect that is hyped to potentially be the next big thing. However, while being controversial can get a lot of eyes on you, it can also turn them away. The UFC isn’t too happy with his pre and post-fight peeing potentially ritual deterring sponsors.

“[The UFC] told my manager that, ‘We handle a lot of sponsors, millions of dollars in sponsors. So for him to pretend to be with his dick out and shaking it after he pees as well or whatever, it’s not really a good look.’ For me, how I see it is, f-ck, what are the sponsors worried about: Me pretending to whip an imaginary dick out and pee everywhere to mark my territory or just watching me just beat the f-ck out of a dude? I don’t know what kind of game these sponsors are playing or whatever, but for me, I just have to make a statement and that statement is pretty clear: This is my cage. Any top dog would do it. My stench is still there. Whenever I get back into the cage, I’m sure I’ll smell it.” – Israel Adesanya speaking to FloCombat’s Top Turtle podcast.

Israel Adesanya makes a good point. Where do we draw the line? We all watch a bloodsport which highlights and celebrates very real danger to the participants. While we will always stop for a second and hope to ourselves that a fighter is okay, it’s not secret we are screaming and whooping in excitement as they get knocked out stiff. With that said, sponsors are completely fine with representing that, but are turned off at one of those same fighters miming urination? The opinion on this will surely be divided, but it’s hard not to think Adesanya’s argument makes sense.