Former UFC women’s bantamweight champion Holly Holm has suffered an injury and will no longer be able to compete at next Saturday’s UFC 243 event.

The news comes from ESPN‘s Ariel Helwani, who reported the following information on Twitter:

“Holly Holm was forced to withdraw from her October 5 fight with Raquel Pennington due to an undisclosed injury.”

Holm and Pennington had first fought in 2015, with ‘The Preachers Daughter’ scoring a split-decision victory over ‘Rocky’.

Holm was hoping to rebound by returning to Melbourne at UFC 243, this after suffering a knockout loss to Amanda Nunes in her most previous effort at UFC 239.

If you recall, back in 2015 at UFC 193 in Melbourne, Holly Holm scored the biggest knockout of her career, flattening the previously undefeated Ronda Rousey with a beautiful head kick. 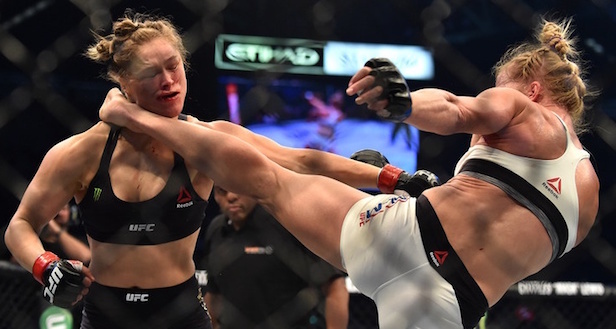 As you can see above, all of the losses suffered by Holm during her recent rough stretch have come to former or current UFC champions, so name shame in that.

Still, a second win over former title challenger Raquel Pennington would have been big for the former boxing champion.

The fight card, which takes place on October 6 in the US, also features a key lightweight tilt between perennial division contenders Al Iaquinta and Dan Hooker.

Who would you like to see Holly Holm fight next once she is healthy and ready to return? Sound off in the comments section PENN Nation!