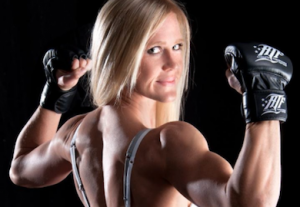 The new Legacy FC bantamweight women’s champion, Holly Holm, will undergo surgery on her broken arm. Holm injured the arm during her fight against Juliana Werner this past Friday, where she eventually won via head kick knockout to claim the title. There were immediate talks of a PPV event featuring a fight between Holm and Cris Cyborg, but any plans for that fight will have to wait because Holm announced on her Twitter that she will be going in for surgery.

After talking to the orthopedic surgeon, we’ve decided surgery will give the best result. So surgery is for tomorrow. Keep ya posted!