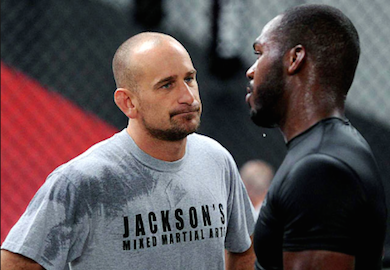 “Yeah, let’s do it. As long as you get here in enough time for camp. … I would not fight [Gustafsson] with one week of camp. But if he wants to get here and get going, absolutely.”]

However it isn’t necessarily Jackson’s call as to who Jones fights, it’s Bones management team.

“Me, I’m like ‘here’s the opponent, here’s the best way we can beat them.’ The only time I ever interfere is when they ask ‘should I fight somebody on eight days notice,’ which is a math problem and I thought that was not a good idea. That was my foray into management.”