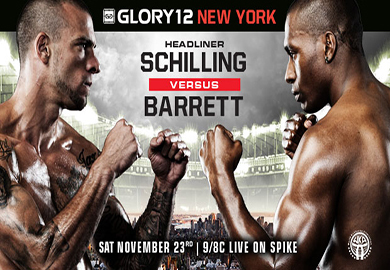 The main card is headlined by middleweights Joe Schilling and Wayne Barrett, and also features Giorgio Petrosyan who will be fighting on American soil for the first time in his career! He will be facing Andy Ristie in the semi-finals of a one night lightweight tournament that will crown the first GLORY Lightweight Champion.

BJPENN.COM is live in attendance and will be updating this post throughout the night. Stay tuned for live results of the main card as it progresses!

Davit Kiria opened up the fight in the first round by connecting with some beautiful combinations, most of which ended with a loud leg kick. Roosmalen held his own in the first round as well by constantly sneaking his uppercuts through the guard of Kiria. Despite knowing they would have two more rounds and a possible finals fight after the first round, they still kicked the night off with an amazing pace of fast action.

Roosmalen dictated where the fight went in the second round and started attacking the body more. He continued to sneak his uppercuts through the guard of Kiria which caught him off guard multiple times. Roosmalen also added solid leg kicks to his arsenal this round, but it seemed with the amount of strikes he was throwing he started to get tired.

Kiria knew he was in risk of losing the fight by decision at the start of the third and came out with guns blazing. Unfortunately for him, not only did Roosmalen answer with combos of his own but they were more impactful. Whenever Kiria found his way through Roosmalen’s guard with a jab, Roosmalen would slap his shin against his opponent’s thigh or rock him with another uppercut. In the last minute of the fight, Kiria looked depleted and defeated. He was only throwing two punch combinations and more often than not, they cut interrupted by Roosmalen’s successful strikes.

Unlike the first semi-final bout, these two men took their and found their distances before any dangerous strikes were thrown. Despite facing the #2 Welterweight in the world, Ristie looked calm and confident that he was going to walk out of this fight with his hands raised. His striking in the first round was selective and his defense was spot-on, but when he had his back against the ropes Petrosyan would come out on top. No man landed anything decisive but Petrosyan did just enough in the first to claim the round.

Petrosyan took a nasty shot in the beginning of the second round, but it was qestionable how clean it was. Ristie tripped Petrosyan toward the corner of the ring and without having his balance, Petrosyan ate a knee to the sternum. Despite having his lead leg attacked throughout the round, Petrosyan still kept utilizing straight kicks to set up other strikes. Petrosyan found big success with his right hook, landing it five times throughout the second round.

Going into the third, it was difficult to see who needed the round to claim the victory. Both rounds were close but it seemed as if Petrosyan had ring control on his side.

It turned out that it didn’t matter who won the first two rounds, however, because Andy Ristie knocked Giorgio Petrosyan clean out in the third. Petrosyan got dropped with a left hook and was unable to answer the count. The referee waved it off less than a minute into the round.

One would imagine that Petrosyan’s third round loss couldn’t be followed up, but Beqiri and Hollenbeck did a decent job at keeping the crowd alive. Both men gassed early on so the fight was a bit sloppy in round two and three. Whenever the two would clinch, two out of three times one of the fighters would end up on the floor due to a simple shove or a trip. Hollenbeck landed some serious shots in the last round and almost walked out of the ring with his hands raised early, but he couldn’t get the job done. Beqiri recovered and stood his ground which brought the fight to the judge’s decision.

If they end up in the finals due to an injury, they’re screwed because of how tired they are. They did put on a fun fight, though and their stock has risen.

Right from the opening bell, it looked like all they wanted to do was knock each other out. Seconds into the opening bell, Ben Edwards swung with a hook from Grandma’s house that Saddik ducked. Edwards ended up on his own bum, but only because he couldn’t catch himself after he whiffed. Saddik caught Edwards with a nice knee to the body, left hook and leg kick combination that echoed throughout the arena.

Ben Edwards had to wait until the second round to receipt him for it, but it was worth it. Edward through a right straight that landed square on Saddik’s nose, but he did not budge or lose his composure. It was impressive, but he was going to have to cover up if he wanted to avoid that shot in the future. After absorbing that shot, Saddik started to chop down Edwards like he was a tree. He attacked the legs with brutal leg kicks and rippled the fat on Edward’s stomach with body shots.

By the time Ben Edwards walked to the middle of the ring for the third round, he was already gasping for air. Saddik looked tired as well, but he had it under control. Since fatigue was taking control of both men, they started developing bad habits. Whenever Saddik would attack with a punch, he would drop his lead hand more than he usually did which allowed Edwards to counter with glancing hooks. They never did much damage, but it allowed him to connect when he desperately needed it. Edwards backed Saddik into the corner of the ring after popping him with a hard left jab and this led Saddik to eat numerous shots around the ring. Edwards rocked Saddik with an overhand right and that was the beginning of the end. Saddik took about four more overhand rights and four left hooks before the big man collapsed on the ground. The crowd erupted as Saddik was falling but you could still hear the thud he made on the canvas.

This was everything the pre-fight interviews hyped it up to be.

Wayne Barrett, the hometown boy, held his hands close to him in the first round and picked his shots. Schilling was looking to counter strike and did not like the fact that he had nothing to counter, so he started taunting Barrett in the middle of the first, Nick Diaz style. Schilling should have been careful what he asked for, though, as he got it in the second round.

Schilling ate hook after hook and was dropped early on in the second. He regained his composure and answered the eight count and only to get knocked right back down on the canvas. Much to the dismay of the crowd, he made it to the end of the round and was obviously down two rounds to none. He would need to finish the fight in the third to get the victory, and he almost did just that.

Schilling dropped Barrett with a vicious knee in the middle of the final round. It was amazing to see Barrett so calm as he rest on his knees and climb his way back to his feet. He touched his gloves together signifying he was okay to continue the fight and made it to the final bell.

When all was said and done, it was Wayne Barrett who would win the bout by way of unanimous decision.

Despite both participating in semi-final bouts, these two put on an amazing display of speed. Ristie is just as crisp and smooth as he was in his fight against Giorgio Petrosyan, but Roosmalen seemed to have lost a bit of his pop. Ristie put together wonderful combinations that wore Roosmalen down the entire round, building up to a knockdown with fifteen seconds left. Roosmalen made it to his feet and seemed fine, so we moved on to round two.

Roosmalen fought a much smarter fight in the second round. His hands were kept high and close, but he would go wild every so often after he connected with a solid hook. Needless to say, going wild against someone as concentrated as Ristie was a bad idea. Ristie countered each shot perfectly until he dropped Roosmalen with a hook. Roosmalen fell to his back and didn’t even try to make it to his feet for the count. The referee made it to nine then waved the fight off.