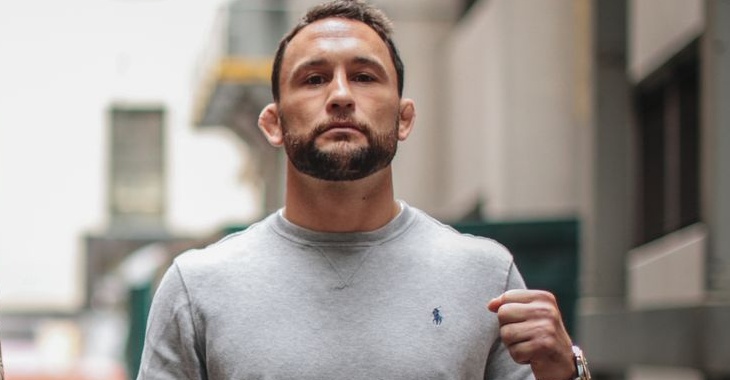 The plan for UFC 218 wasn’t always for it to be headlined by a Max Holloway vs Jose Aldo rematch. Initially, it was Holloway set to defend for the first time against former UFC Lightweight champion and two time Featherweight title challenger, Frankie Edgar. Unfortunately, Edgar ended up breaking his orbital bone in training and had to be pulled from the fight just weeks prior.

But now he’s ready to go and the pieces have fallen back together. UFC 222 on March 3 from Las Vegas will be the time and place, Edgar spoke with FloCombat today about the rebooking and how it felt when things fell apart.

“I have so many reasons why I feel like this is meant to be. I obviously wasn’t thinking that way or being that optimistic when I got my face broken in practice. It felt like the world was crashing in around me, but I’m very happy things all still worked out because it all could have gone a much different way. Despite the things that happened everything pretty much stayed on track and I was able to still get this fight. That’s why I feel like it’s already written. I just have to go in there, follow through and make it happen.

We are eight weeks out right now and that’s perfect,” Edgar said. “I was initially hearing the fight may go down in April, but was happy to hear it is going down in early March. I got the word and said, ‘Let’s go!’ It’s obviously unfortunate how things worked out in the last camp, but I’m going to get there this time and get the job done. Styles make fights and I love this matchup. I’m hearing these people on the internet talking and asking how I’m going to beat him when I lost to [Jose] Aldo. MMA math doesn’t always work that way. I’m confident in my skills and I truly believe I’m still improving with each performance. I think that showed in my last fight because that was one of my strongest performances. I’m ready to go out there and have a defining fight with Holloway and he’s the perfect guy for me.

I’ve been doubted since day one. Before I even started fighting people were doubting me and I love proving them all wrong. Going out there and proving these losers who have never done anything in their lives wrong is almost better the victory itself. B.J. Penn and I have history, but Max is just another opponent, man. He could be from Wyoming for all I care. It doesn’t matter to me. I know he’s a very tough competitor and he’s the champion. He’s been proving his worth as the champion and that’s going to make it all the more better when I go and get that belt from him. If he has questions he’s coming to the right guy for the answers. I’m like Jeopardy: What is…I’m gonna whoop that ass. That’s the answer he’s coming to find.”

In each of the champion, Max Holloway’s last two fights, he took on and defeated the legend, Jose Aldo both by third-round TKO. Holloway hasn’t lost since 2013 when he took on Conor McGregor. He currently rides a lengthy twelve fight win-streak. Edgar has fought twice since his last loss which was at UFC 200 against Jose Aldo for the Interim Featherweight title. Aldo is the only man to defeat Edgar at 145 lbs which gives Edgar a record of 7-2 in the division. If Edgar can defeat Holloway, he’ll join the likes of BJ Penn, Randy Couture, Georges St-Pierre and Conor McGregor as the only fighters to hold UFC titles in two different divisions.