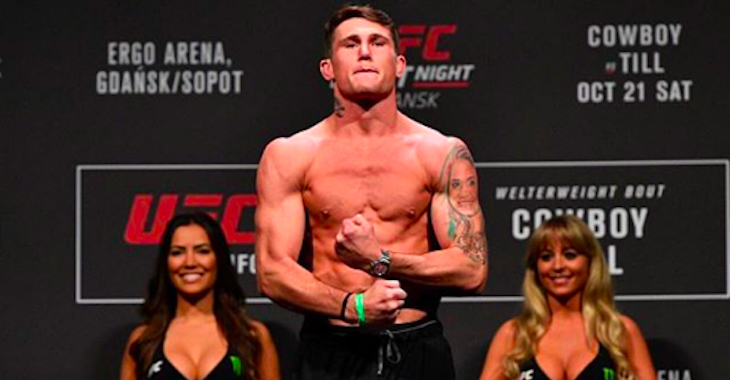 We’ve all been waiting to see who Darren Till will fight next after his impressive performance against Donald ‘Cowboy’ Cerrone. Talks of opponent after opponent came and went and so did 2017, but this new year promises to be the Scouser’s year. According to this latest interview, he’s got some big plans and envisions himself becoming UFC welterweight champion before 2019. It seems like the big first step to that is fight with Stephen ‘Wonderboy’
Thompson which was rumored earlier last year.

“It’s a great honour to be honest [to be named UFC’s Breakthrough Fighter of the Year]. My name is all over the world now – it’s great recognition and this is extra special since it’s the fans that voted for it. It’s really taken off in the past few months. I was off for the whole of 2016 [with injury], but obviously I came back last year and I had two good wins before I took [Donald] Cerrone out in the first round. People are starting to think I’m the next big thing in MMA and they’re not wrong.”

We asked, you voted! Here are the End of the Year results as voted on by YOU, the fans!

First up, YOUR Breakthrough Fighter of the Year goes to ..@DarrenTill2! pic.twitter.com/HvaFgviRIQ

“I’ll be champion by the end of the year. Last year was great, but 2018 is going to be huge. We’ve already got something big in the pipeline. 2018 is going to be the year of the first Scouse champion, I can feel it. I just know it’s going to be my year. I fancy that fight [with Stephen Thompson]. He’s the No 1 contender so if I beat him then that’s an automatic title shot and by the end of the year I’ll be champion, so we’ll see what happens. I don’t know what happened with [Mike] Perry. He’s booked another fight, so he’s missed his chance because I’d said I’d still fight him even though he lost. I’m the biggest name in the welterweight division now, so I can just sit back and choose who I fight.” — Darren Till speaking to Boxing News 24.

The hype behind a potential fight between Darren Till and Mike Perry faded as Perry lost and was booked against someone else. Gunnar Nelson is still waiting on a shot to fight Till, but prospect seems to have his eyes on bigger and better fighers. Whoever is chosen, sooner or later we’ll get to see Darren Till back in the Octagon. It makes a whole lot of sense that the next time will be in March at the UFC’s London card.